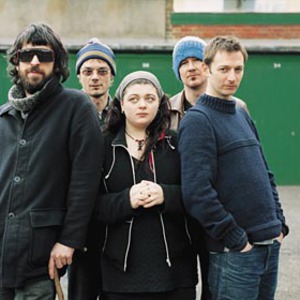 Quickspace was a London-based experimental rock band started in 1994. Quickspace formed in London, originally under the name Quickspace Supersport. Tom Cullinan, vocalist and guitarist, was formerly in Th' Faith Healers but developed their punky sound into a more tuneful but experimental style. Quickspace formed their own record label called Kitty Kitty, but while releasing many of their records through this, also released on other labels such as Domino Records and Elefant Records.

Quickspace formed in London, originally under the name Quickspace Supersport. Tom Cullinan, vocalist and guitarist, was formerly in Th' Faith Healers but developed their punky sound into a more tuneful but experimental style. Quickspace formed their own record label called Kitty Kitty, but while releasing many of their records through this, also released on other labels such as Domino Records and Elefant Records.

Their first single, 'Found a Way', was released on the Love Train label, followed later that year by Superplus, an EP released on Domino, which got into the Indie Top 40 and earned them a reputation as a kind of "Stereolab that rocks", although this does not seem too appropriate, given their previous output. However, the label stuck.

Wendy, Max and Barry left the band, leaving Tom and Sean to think over what to do next. Rather than call it quits, they recruited Nina Pascale (vocals/guitar), Paul Shilton (keyboards) and Chin (drums), dropped the 'Supersport' part and started working again.

'Friend', the first single recorded with the new line-up, came out in early 1996 and was remarkably reminiscent of th' late Faith Healers. It was the second release on Kitty Kitty, after the band had decided to decline offers by other labels, keep a low profile and release their stuff themselves.

Meanwhile, work on their first full-length album had begun. It was released in autumn 1996, following the release of another excellent single, 'Rise'. The album itself, simply titled Quickspace, is a bit of a mixed bag, excellent songs alternating with filler material and fragments, something of an anti-album almost, but most reviews were quite favourable.

In spring 1997, a collection of their early singles and rare tracks was released on the low-priced album Supo Spot. It was followed later that year by a very Superplus-ish EP, 'The Precious Mountain'. Other than that and a few gigs around the UK, Quickspace kept a rather low profile that year.

A new single, 'Hadid', came out in May 1998. Chin, who was always only supposed to be just on a temporary assignment, left the band about the same time and was replaced by Steve Denton. Another 7", 'Quickspace Happy Song #2' came out in June, together with the Precious Little EP, which contains the songs from the 'Hadid' and 'Happy Song #2' 7-inches on one CD.

Precious Falling, the second album proper, was released on CD and double vinyl on 31 August 1998. The album had been recorded in late 1997/early 1998 (i.e. with Chin still on drums). The band then went on tour and covered pretty much all of Europe, including a gig supporting Yo La Tengo in London and a set of gigs with labelmates Novak and Ligament in the UK.

In 2000, the band released The Death Of Quickspace to much critical acclaim, followed by the 'Flat Moon Society' single later that year. Then, Quickspace seemed to have disappeared from the face of the Earth, and nobody was quite sure whether the band was dead or had simply relocated to the moon. Tom Cullinan released a complete cover of Fleetwood Mac's 'Rumours' LP under the pseudonym Dougal Reed, but no new Quickspace songs materialized for over three years.

Then, in 2003, an unexpected single was released on the somewhat obscure Italian Homesleep label, but it would take two more years until a completely renewed Quickspace featuring Cullinan, Ed Grimshaw (drums), Louis Jack-Jones (bass) and ex-Faith Healerette Roxanne Stephen (vocals) released their next single 'Pissed Off Boy' on the Domino label in 2005.

After this Cullinan reformed Th' Faith Healers for some concerts in early 2006 but there has been no further activity under the Quickspace label.

The Death Of Quickspace