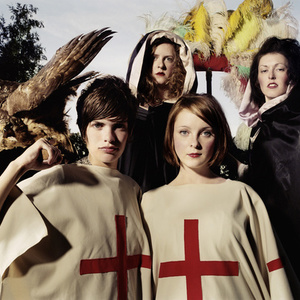 Electrelane are a band from Brighton, England. They were formed in 1998 by Verity Susman (aka Vera November) (keyboards, farfisa organ, lead vocals, guitar, saxophone, clarinet) and Emma Gaze (drums). In its last incarnation, the band was composed of these two plus Mia Clarke (guitar, backing vocals) and Ros Murray (bass) (aka Ray Rumours). Their music draws from a wide range of influences including Neu!, Sonic Youth, and The Velvet Underground.

The band's fourth album, No Shout, No Calls, was written in Berlin during the 2006 World Cup, recorded in Benton Harbor, Michigan in late 2006, and released in May 2007 worldwide.

In November 2007, the band went on "indefinite hiatus," but announced in February 2011 that they would play several dates in England.

?This summer we're going to play some festivals, including Field Day in London, and a few gigs. We're still confirming everything, so will be announcing dates soon. It's very exciting for us to be playing together again after more than three years, and we're just sorry that we won't be able to make it to the US this time. At the moment our plan is just to play live this summer, so we hope to see you!" (Source: Electrelane website http://www.electrelane.com/site.html)

No Shouts No Calls

Rock It To The Moon