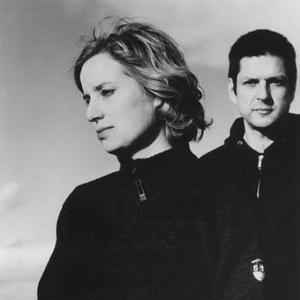 Vocalist/guitarist Lawrence Chandler, a former protege of minimalist composer LaMonte Young, and vocalist/bassist Martha Schwendener (now known under the name Echostar) formed Bowery Electric in late 1993 and played their first show together at Brownie's in New York City in January 1994. With drummer Michael Johngren completing the trio, Bowery Electric played shows across the East Coast and recorded a double seven inch single with Kramer that they released on their own Hi-Fidelity label.

In the fall of 1994, very impressed by the debut single set, kranky got in touch with the band. The debut, self-titled album was recorded with Mike Deming at Studio .45 in Hartford, CT in January 1995. Bowery Electric was released on compact disc and vinyl in mid-1995. As The Wire described it, Bowery Electric "weave chilled downbeat dirges via hazy sheets of distorted guitar (that sound as though they were recorded underwater), stumbling sluggish percussion and benumbed male/female vocals... the album works as a sustained moodpiece...". Or, as Chris Wodskou put it in the Sept. 1995 issue of Exclaim!, "Bowery Electric shimmer in the way a 20 foot sheet of metal shimmers and resonates when vibrated. A sharp pop confection with the blunt force of a three-alarm headache."

Simon Reynolds' seminal post-Rock article in the November 1995 issue of The Wire placed Bowery Electric in the forefront of "a distinctively American post-rock." The band returned to Studio .45 to work on the second full length release with engineer Rich Costley. With the acquisition of samplers, the band's song writing process (which had always started with the bass track and drum beats) expanded. The resulting album, Beat, featured a drummer on four out of ten tracks, with plenty of subtly sampled beats and bass tones anchoring the bottom end. Lawrence Chandler told Alternative Press that "technologically [Beat] is the beginning of us learning our way around a proper sampler and software which allows us to work with samples on the computer. We can sample ourselves, manipulate sounds, create our own beats and basically work with fewer restrictions." Beggar's Banquet licensed Beat for release in the U.K. and Europe and with drummer Wayne Magruder added to the group, Bowery Electric began tours of the U.K. and North America.

Melody Maker reviewed a show in July 1997 and noted that "for two people to be able to create such a huge, rolling epic sound is surprising; what really hits hard is just how huge it can be, how the inarguable and pulverising beauty of BE's sound simply forces a slacked out crowd into its swell."

Beggar's Banquet released Vertigo, a collection of remixes of Beat tracks by Main, Third Eye Foundation, Chasm, Witchman, Immersion and others. Beat was the last album Bowery Electric made for kranky, they went on to release an EP (Blow Up/Electro Sleep) and album (Lushlife) for Beggar's Banquet and ultimately broke up in 2000.

Eventually, Lawrence formed a solo project called Metrotech, while Martha formed a project called Echostar. So far Martha released one album, Sola, as Echostar, but Lawrence only appeared with a remix on Calla's Custom.