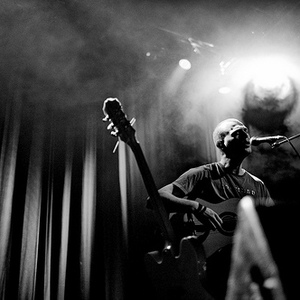 Matt Elliott is a singer/songwriter from Bristol, United Kingdom, who plays folk music with an approach of a dark ambience. He also produced & recorded under the name The Third Eye Foundation. Elliott was first inspired to investigate & to attempt to understand music at around 7 years old on hearing the mournful tones of a russian orthodox choir & wondering how music alone can move you to tears. This would eventually inspire him to study music un-academically through his own research into sound & music.

Elliott was first inspired to investigate & to attempt to understand music at around 7 years old on hearing the mournful tones of a russian orthodox choir & wondering how music alone can move you to tears. This would eventually inspire him to study music un-academically through his own research into sound & music.

He started his musical career in a record shop from the age of 16. A second hand record shop (The legendary Revolver Records who's employees have included Dave Pearce (Flying Saucer Attack), Daddy G, Debbie Manning (Foehn)) owned by a music enthusiast to rival John Peel, Matt considers these years as his basic education in music. He formed along with Kate Wright (Movietone) & Rachel Brook (Movietone/Flying Saucer Attack) the band 'Linda's Strange Vacation' which met on Sundays to rehearse in a shed at Brooks parents with begged borrowed & stolen instruments including rolls of carpets, snooker cues, a broken keyboard then slowly the guitars & drums arrived. Kate Wright & Rachel Brook went on to form Movietone with which Matt played as an occasional member. About the same time Brook & Dave Pearce formed Flying Saucer attack & the first version of The Third Eye Foundation appeared, the idea being a loose collective. Elliott recorded with Flying Saucer attack under this name involving Debbie Manning (Foehn) & Niven Murray on a couple of tracks.

With the royalties earned from Flying Saucer Attack he started his own micro-label called Linda's Strange Vacation who's first release was AMP's 'Get there'/'Remember' 7".

The second release was the first Third Eye Foundation album entitled 'Semtex' released on Linda's Strange Vacation with a lot of help from Domino Records. It was recorded on a borrowed 4 track using anything & everything to try to escape the 4 track sound. Predominated by guitar noise & drum machines with Debbie Manning providing vocals & additional guitar the result is an intense but bleak wash of sound.

'In Version' is the last release for Linda's Strange Vacation Records. It is a collection of remixes of bands Elliott was working with and/or friends with including Hood & Crescent. The Flying saucer Attack remix consists solely of music recorded for FSA by Elliott but rejected by Pearce, reworked, obliterated & re-collaged. Pearce threatens legal action.

The second Third Eye Foundation album proper is 'Ghost' slightly preceded by the 12" Semtex (nothing to do with the album of the same name) Both Ghost & Semtex 12" are more sampler based & twist squeeks, howls, screams & anything & everything into soundscapes backed by fractured, skittering drum beats. The release of 'The Sound of Violence' ends what Elliott described as a bleak & disturbing era both sonically & mentally.

After investing in a new studio set up, 1998 saw the release of 'You Guys Kill Me' the most critically acclaimed of all the Third Eye Foundation releases. With increased recording possibilities the result is a much broader sound with many more ideas realized. It's far more accessible than the harsh tones of Ghost but still has a dark edge, combining more subtle use of depth & darkness within the cinematic sound with the cluttering drum & bass & breakbeats attempting to hold everything together.

Fear of a Wack Planet & In Bristol with a Pistol (a remix of the track on You Guys Kill Me) are released as singles.

The final Third Eye Foundation album proper is released in 2000 'Little Lost Soul' is Elliott's attempt to make a beautiful record. Far more based around acoustic orchestra instruments & choirs, the beats recede slightly taking a back seat almost completely in the song 'Lost' but the darkness is still there just beneath.

'I Poo Poo on your Juju' is released in 2001. It is a collection of Third Eye Foundation remixes of Yann Tiersen, Blonde Redhead, Tarwater, Urchin, The Remote Viewer, & others.

Elliott starts work on the album 'The Mess We Made' released in 2003 under his own name largely to separate himself from his previous working method. The 10" 'Borderline Schizophrenic' is the last gasp of the Third Eye Foundation consisting of tracks recorded for the unfinished next album but released as a Matt Elliott record. 'The Mess We Made' loses the drum breaks almost completely focusing more on atmospheres & vocals. It is a very sombre affair with songs made out of stretched & broken vocals over melancholy instrumentation. Some reviews warn against listening to it when in a fragile state of mind. It is his first collaboration with Chris Cole (Manyfingers) & Sabine Chaouch.

The last ever Third Eye Foundation album is released in 2004. Consisting of a remix project of artists released by the French label 'Ici D'ailleurs'. The idea was that the project was the musical equivalent of OULIPO. A French literary movement from the 60's so a list of rules of engagement were drawn up. It was the first of many in the OUMUPO series including artists: Kid Loco, Rob Swift & many others.

2004 also sees Elliott's first proper release with Ici D'ailleurs. 'Drinking Songs' is a collection of dark faux european folk ballads inspired by the shanty 'The Sinking Ship song' from The Mess We Made. Choirs of Elliott's sombre voice sing over broken guitars & cellos of being left for dead, trying to contact the living, discovering ones own failings, of being resigned to ones fate as in "The Kursk' where the choir portrays the shivering desperate crew of the stricken submarine as she lies at the depths awaiting rescue from an uncaring government.

2006 sees the second of what will end up a trilogy. 'Failing Songs' is a continuation in theme. The voice more resigned, but the overall themes the same, loneliness, frustration. songs about failures as people & as a species & every point in between. Failing Songs features Chris Cole on drums & is the first collaboration with Patricia Arguelles whose violin parts were recorded over a series of nights in the Village Church.

2008 sees the final part of the 'Songs' trilogy. 'Howling Songs' is a first in that it was mainly recorded & mixed in a studio. Features again Patricia Arguelles & Chris Cole (Manyfingers) aswell as Aurelien Potier on various instruments.

2012 sees the release of another Matt Elliott album 'The Broken Man' on Ici D'ailleurs Records. Recorded in Yann Tiersens studio and mixed by Yann Tiersen himself.

Farewell To All We Know

The Mess We Made