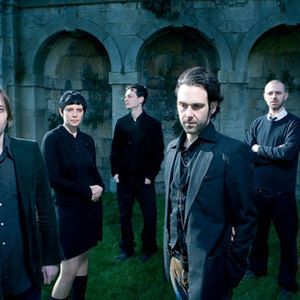 From its conception as a bedroom-studio hobby in Summer 1996, Piano Magic's trajectory has never been textbook - random at best. Originally, a self-confessed revolving door operation - musicians arriving, contributing and leaving as they pleased - they harvested a catalogue of varied singles, EPs and two albums by 1998. This convey-belt membership also resulted in a plethora of sonic stylings, from smallbeat Kraftwerkian Meccano Pop on debut album, 'Popular Mechanics' (1997) to the breathless, ethereal, multi-layered melancholy of 'Low Birth Weight' (1998).

Only in 1999 did Piano Magic resemble anything like a conventional format group.
Smooth-talked into playing a Dutch festival which actually turned out quite well, they decided to play anywhere they were wanted and began to build something of a cult following, particularly on the European Continent. They spectacularly showcased the post-modernist baroque sound of 'Artists' Rifles' (1999) at the Benicassim and BAM music festivals. Ironically, the band have never infiltrated the hearts of the British music press - out of time, unfashionable and kinda weird looking, its best not to stay home much.
Tours of Germany, Holland, Italy, Belgium, France, Spain peppered the next few years. The band signed to 4AD Records in 2000 and delivered their most critically contentious work, 'Writers Without Homes' and the soundtrack to Spanish director, Bigas Lunas' 'Son De Mar' movie. Though oft-maligned, 'Writers Without Homes' was a particularly monumental milestone for the band, as it featured the first vocal recording for 33 years of lost 60's/70's folk heroine, Vashti Bunyan.
Post-'Writers, Piano Magic have become closer to a more ?conventional group format.? Drafting in French musicians, Jerome Tcherneyan and Franck Alba alongside English bassist, Alasdair Steer, Piano Magic recorded 'The Troubled Sleep Of Piano Magic,' for Spanish independent, Green Ufos. This album perfectly encapsulated the live sound of the group - delicate vocals, glistening guitars, insistent drums, anthemic synth washes. A new record, Saint Marie EP followed in June 2004 and featured collaborations with, again, Vashti Bunyan as well as Alan Sparhawk from Low and Ben Ayres from Cornershop. Piano Magic's 2005 album, 'Disaffected,' stretched fingers into an even more melodic, near-on "pop" sound, magically without dispensing with their notorious depth of emotion.
It features guest vocal contributions from John Grant of The Czars and Angle David-Guillou of Klima (the latter, now with her own debut solo album out on the Peacefrog label). In the 2 interim years between the release of Disaffected and follow-up, the Guy Fixsen-produced, 'Part Monster' (2007), the band continued to be prolific and not only in concert (the band added Turkey, Poland, Italy, Greece and Portugal to their gig list). Johnson released a debut album of experimental electronic under the name, Textile Ranch and along with keyboardist, Cedric Pin, as Future Conditional, put out an album of electropop on LTM, 'We Don't Just Disappear.'
After an uncharacteristically lengthy hiatus in which Johnson worked on his debut solo long-player ('Details Not Recorded,' 2009), Piano Magic released their 10th official album, 'Ovations' (2009) on the pioneering UK independent label, Make Mine Music. 'Ovations,' featuring special guest appearances from Brendan Perry and Peter Ulrich of Dead Can Dance, found Piano Magic at their most confident, melodic and unabashed, merging early 80's coldwave electronics with Eastern European acoustic instrumentation.
in June 2012, Piano Magic released their eleventh full-length album Life Has Not Finished With Me Yet (Second Language/Saint Marie Records). It sees them emerging from beneath the wreckage of previous guitar-heavy releases to re-investigate the darker, more electronic sonic themes of their earlier work. Instant parallels will inevitably be drawn with the ghostly chamber pop of 1999's Artists Rifles and the even-earlier surreal romanticism of Low Birth Weight. At the core, once again, Glen Johnson's unashamedly nihilistic ruminations on the human condition, though now shrouded in foggy analogue synth washes, pulsing heart beats, cathedral reverbs and Joe Meek-esque spectral vox. Indeed, this is an album of beautiful, indispensable baroque ghostliness, of disconnected hearts and oceans.

To date, Piano Magic has harboured over 60 sonic orphans with nothing better to do, recorded 11 proper albums, a double CD retrospective and many, many singles. They've outlived several of the labels they've recorded for and show no signs of stopping. At this point in time, Piano Magic is Glen Johnson, Franck Alba, Jerome Tcherneyan, Alasdair Steer and Ang?le David-Guillou.

The Troubled Sleep Of Piano Magic