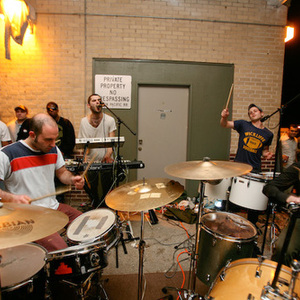 Aa (pronounced ?big a little a') began as a three-piece in late 2002. Based in Brooklyn, NY, the now-quintet has built up quite a rep with their rowdy live shows using treated vocals, keyboards, blissed-out electronics and tons of drums. They have releases on Narnack, Cardboard, Deleted Art, Kill Shaman, and Deathbomb Arc record labels. More info: http://www.sleeep.com/aa/recordings.html. AA was a post-punk band from Belgium. They released just one EP, the ?Essential Entertainment? EP in 1981.

AA was a post-punk band from Belgium. They released just one EP, the ?Essential Entertainment? EP in 1981. In 1994 all 4 songs were re-released on the ?4X4? sampler on the Antler/Subway Classix label, together with 4 tracks by De Brassers, Struggler and The Cultural Decay.
In 2009 the Brooklyn label Softspot Music re-released the EP on vinyl in an edition of 500 numbered copies.