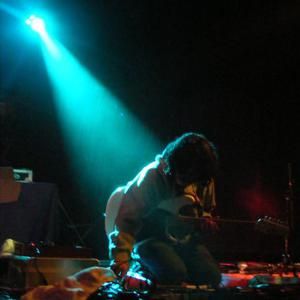 Almost an institution in Portland, Oregon (where he is currently Music Curator at the Yale Union contemporary-art center), Adam Forkner has been making meditative, ambi-tasting, improvised master jams (punctuated with dance-floor rhythms) since the mid-'90s?in collaboration with others in Yume Bitsu and World, and solo as [[]] and White Rainbow. The music of White Rainbow flows through assorted albums on the Kranky, States Rights, and Marriage labels. ?Darker Drifts? (4:20 excerpt) is from his third Gnar release, White Rainbow Gnarchives Vol. 1. Head food.

Beyond his own musical output, Forkner has worked as both an instrumentalist and producer with a wide array of contemporary musicians including Jackie-O Motherfucker, Atlas Sound, Dirty Projectors, D Yellow Swans, Yacht, Adrian Orange, Little Wings, Devendra Banhart, and many others.