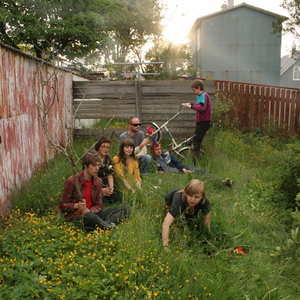 Seabear is an indie folk band from Reykjav?k, Iceland. Although hailing from Iceland, they sing primarily in English. Seabear started in 2000 as Sindri M?r Sigf?sson's solo project and then turned into a band when Sindri was asked to open for The Books in Berlin. Never having performed his songs live, he asked two of his friends, Gu?bj?rg Hl?n Gu?mundsd?ttir and ?-rn Ingi ?g?stsson, to join him. After some time playing live and practicing together, they both decided to join the band.

Their music is subdued and mellow folk pop, with hints of piano, violin, acoustic guitar and atmospheric vocals, all carefully squeezed through a lo-fi filter.

They released their first full-length album, The Ghost That Carried Us Away, in Autumn 2007 under Morr Music. Sindri also has an solo-artist EP under the name Seabear entitled Singing Arc EP.

Seabear has announced, via their myspace, that they are working on a new album which they hope to release in February or March 2010.

Have now released a new 7" Lion Face Boy/Cold Summer http://www.anost.net/Labels/Morr-Music-Shop/Seabear-Lion-Face-Boy-Cold-Summer.html you can listen to the songs on the same site.

We Built A Fire

The Ghost That Carried Us Away