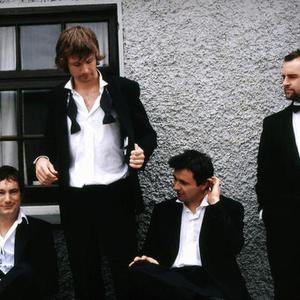 1991 - 2000
Brian, Paul, Dom and Damien Rice form Juniper, having met in school. They go to college, play some weddings, 21st's and Bar Mitzvahs... and for a while have a Sunday night residency in the Kildrought Lounge and Bar, Celbridge. They meet Dave, who weans them off the Neil Diamond and Roxette covers. Band move into house in country, release EP, Manna, and two singles in Ireland. Damien leaves band, the others read about Chuck Yeager and his Right Stuff. They call the new band Bell X1. Bell X1 support Elliott Smith and Bon Jovi in the same 1 week period, leading to severe identity crisis, making small music with big hair. They make their first album, Neither Am I, in the summer/autumn of 1999 with Nick Seymour of Crowded House and release it in Ireland a year later, after much touring and a couple of old singles.

2001
Band take some time to indulge musical differences. Paul records and tours as drummer with Tipperary siren Gemma Hayes, Brian's away with Offaly hearthrob Mundy, and Dave and Dom join Richie Mullen of Lino Richie Carpets, Finglas, in touring cabaret show. Bell X1 regroup in late summer and write songs for what would become Music In Mouth in a house by the sea in Wexford.

2002
Second album recording starts in Ridge Farm studios in Surrey, with producer Jamie Cullum. After 4 weeks they move to the Fallout Shelter, London. The studio has no teapot!! Some moaning. The band take turns to make dinner. Some of it is shit. The world Cup happens. Mixing finishes in July and everyone goes away for a while. Come back and mix it all again. Borrow a friend's house in Kilkenny, record some more songs, play hurling, are laughed at by locals. Music In Mouth finally finished in December, a few days after the birth of Jamie's daughter Ellie, who was both conceived and born during the making of the record.

2003, 2004
The album Music In Mouth is released on July 21st 2003, to tremendous applause, and the band play with all sorts to try to flog it. Tom McRae, Keane, Starsailor, Aqualung and Snow Patrol show them the highways and byways of the UK and continental Europe. Songs from the record appear in many TV series, from Teachers to The OC, and at home the album goes double platinum, with four top 40 singles. In July 2004, the band gather in yet another house in Wexford to write a new record.

2005
Flock is recorded in Dublin and mixed in London, with Roger Becherian producing and Phil Hayes knob twiddling. A shrine to Daniel O' Donnell (Irish singing deity, ref Cliff Richard without ever having had a brush with cool) is created in the green room, Dave creates Pistachio Nut Shell Installation and mustaches are grown. The band take a break from recording and sell out a mini tour in the USA, where they record a live session for Nic Harcourt's essential show on KCRW in L.A.

Flock is released in Ireland and hits the heights of #1 in the album charts. The band leaves Island Records and sets up its own record label called BellyUp Records. A live album called Tour De Flock is released - it is a 2-disc compilation featuring 16 tracks from their sold-out gig at The Point Theatre, Dublin on December 1, 2006.

In 2008, Flock is released in the United States and the band appears on the St. Patrick's Day edition of the Late Show with David Letterman.

On 2nd October, Brian Crosby quits saying "It's been an extraordinary privilege to be in a band with your mates for more than 15 years. I'm really grateful for everything I got to do with Bell X1, for all the adventures we had and for the great support of our fans. It's been particularly wonderful to have connected with so many people and to have got to meet people all over the world doing what I love. I look forward to continue making those connections. At the same time I'll be applauding the boys continued success."

As well as promoting Flock in the USA, the band gets busy recording a new album Blue Lights On The Runway. It finally sees the light of day in 2009, with lead single The Great Defector becoming their biggest hit to date (no. 3 in the Irish charts).

2011
The band will release its newest album Bloodless Coup in stores and online on April 1 in Ireland, April 4 in the UK, April 8 in Germany and Benelux, April 12 in the USA and Canada, and April 26 in France. The album's lead single is ?Velcro,? which the band performed on The Rachael Ray Show on St. Patrick's Day.

Blue Lights On The Runway