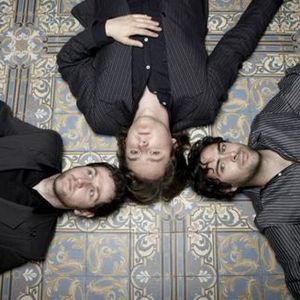 Keane is an English piano rock band, first established in Battle, East Sussex, United Kingdom in 1995, taking their current name in 1997. The group is comprised of composer, bassist, and pianist Tim Rice-Oxley, lead vocalist Tom Chaplin and drummer Richard Hughes. Their original line-up included founder and guitarist Dominic Scott, who left in 2001. For their 2008 album "Perfect Symmetry" and the following tour, Jesse Quin joined the band on stage to play bass. He also played a large role in recording the album itself, and he subsequently joined the band fully in 2011.

Keane are known for using a piano as their lead instrument instead of guitars, significantly differentiating them from most rock bands. The inclusion of a distorted piano effect since 2006 and various synthesizers are now a common feature in their music that nowadays combines the pure piano rock sound used during their first album and the alternative rock sound which developed during 2005. Acoustic and power ballads are also a highlight in the group's music and have evolved into many fan favourite songs such as "On a Day Like Today" and "We Might As Well Be Strangers".

Keane's first two studio albums, Hopes and Fears and Under The Iron Sea, achieved great success in the United Kingdom upon release and very high sales worldwide: their multi-award-winning debut was the best-selling British album of 2004 and their follow-up sold 222,297 copies during its first week on sale in June 2006.

Their third album, Perfect Symmetry was released on 13th October 2008. First single 'Spiralling' was available for free download, and half a million copies were downloaded worldwide. The album has clear 80s influences, and is compared in Q magazine to both David Bowie's 'Scary Monsters' and The Dandy Warhols' 'Welcome To The Monkey House'. The band have cited Talking Heads as another key influence. This was their first album to include guitar, successfully breaking away from their original set-up.

The Silenced By The Night Songfacts reports that their fourth album, Strangeland will be released from 4 May 2012 through Island Records. First single 'Silenced By The Night' was originally only to be released as a commercial single in the United States, but was released worldwide apart from the United Kingdom on March 13, 2012. The single was finally dropped in Keane's home country April 15, 2012.

Cause And Effect (Deluxe Edition)

The Best Of Keane CD2

The Best Of Keane CD1