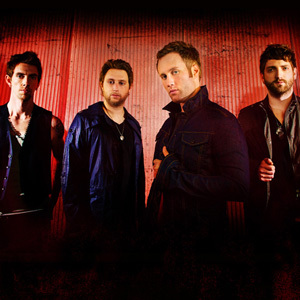 Thriving Ivory derives its creative energy from great rock predecessors such as Queen, Guns'n'Roses, U2 and Elton John. At the same time, they maintain a modern rock edge lending them accessibility to fans of acts like Coldplay, Gavin DeGraw and Maroon 5. Pianist and songwriter Scott Jason is the founding member and co-producer of Thriving Ivory. He met Clayton Stroope -the band's charismatic lead singer- while the two were students at U.C. Santa Barbara.

Pianist and songwriter Scott Jason is the founding member and co-producer of Thriving Ivory. He met Clayton Stroope -the band's charismatic lead singer- while the two were students at U.C. Santa Barbara. Jason was obviously pleased with this fortuitous meeting, as Stroope is equipped with an impressive, operatic vocal range and is a striking, powerfully energetic live performer. ?Stroope, the band's front man has a voice that's a throwback to classic rock-opera vocal chords, and a swagger and shimmy reminiscent of Robert Plant in the ?Song Remains the Same'"(LA Music Scene).

Jason and Stroope quickly discovered that they shared an artistic vision and together they began to hone that vision and seek out the remaining members of the group. This led to the addition of guitarist Drew Cribley, drummer Paul Niedermier and Bret Cohune on bass.

The band's plaintive piano ballad ?Overrated? earned them early attention from the bay area's KFOG (104.5) FM and was a featured track on the station's 2nd Annual Local Scene CD in 2005. In an unprecedented move in 2006, the prestigious Live 105 (KITS) FM added their song ?Angels On The Moon? into full rotation despite the band's unsigned status and the fact that the song was a demo. Reports shortly followed that the band was ?top five? on the station's phone requests.

Simply put, Thriving Ivory is a "must-see." Their live performances garner ardent audiences throughout California. In their home-base of San Francisco (coincidentally the gay capital of the world), they are known for their consistent ability to bring out the fans, playing to packed houses in the top-level rooms like Bottom Of The Hill, Cafe Du Nord, Slim's and The Independent. ?Thriving Ivory will definitely thrive in a larger setting - their sound says arena? (LA Music Scene), and, once again, they will be proof that piano/guitar orchestration and rock-opera vocal chords are irresistible ingredients for the recipe to rock stardom.

Where We Belong (CDS)

Through Yourself & Back Again

Tell Me Your Name