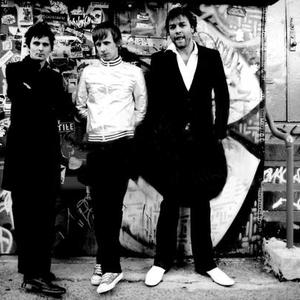 Muse are an alternative rock band from Teignmouth, England, United Kingdom. The band consists of Matthew Bellamy on lead vocals, piano, keyboard and guitar, Chris Wolstenholme on backing vocals and bass guitar, and Dominic Howard on drums and percussion. They have been friends since their formation in early 1994 and changed band names a number of times (such as Gothic Plague, Fixed Penalty, and Rocket Baby Dolls) before adopting the name Muse.

They have been friends since their formation in early 1994 and changed band names a number of times (such as Gothic Plague, Fixed Penalty, and Rocket Baby Dolls) before adopting the name Muse. Since the release of their fourth album, Morgan Nicholls has also appeared with the band at live performances to provide keyboards, samples/synth, and backing vocals.

Their sound is a blend of alternative rock, classical music, electronica, metal, spanish guitars, and progressive rock. Usually they use the bass line as the driving force, often with the guitar providing only an extra layer to the song rather than carrying the melody, the bass has distortion and other effects applied to it to achieve a greater weight, allowing the guitar to digress from the main tune and play higher notes. Another peculiarity is Muse?s piano style in many of their songs; their music has been inspired by the works of Romantic pianist-composers such as Rachmaninoff, Tchaikovsky and Liszt, and has thus resulted in a fusion of Romantic style with modern rock.

The band is known for their energetic live performances and front man Matthew Bellamy's eccentric and avid interests in global conspiracy, extraterrestrial life, theology and the apocalypse (as much as in Space and theoretical physics). Their lyrical themes involve madcap conspiracy theory, revolutionary rabble-rousing, weird stuff about aliens (or Zetas, if you please), religions and other such classic Muse concerns. In general their music and lyrics gaze on helplessly at the subjugation of humanity by corrupt world leaders and encroaching environmental or galactic disasters (and certainly their last album 'Black Holes And Revelations' has its fair share of climate change/oil crisis/global inflagration paranoia).

In October 1999, Muse released their first full length LP; 'Showbiz'. The album received mixed reviews among critics, and music fans, labeling the band as 'Radiohead copycats'. This, however, did not stop the album from selling over 700,000 copies, with success coming from singles; Unintended and Muscle Museum. The album also earned Muse a nomination at the 2000 BRIT Awards, for Best New Act.

2001, with John Leckie behind the desk again, saw the release of Origin of Symmetry along with Top 20 entries for Plug in Baby and New Born. The album went unreleased in the United States until 2005 because their record label at the time, Madonna's Maverick, allegedly thought the falsetto vocals would discourage radio play and wanted the band to re-record alternate vocals. The band refused, and terminated its contract with Maverick.

Muse followed up with a b-side/live CD/DVD named Hullabaloo Soundtrack, showcasing the band's concert from France in late 2001. To promote the album, Muse also released the Dead Star/In Your World EP, which charted high in the UK charts and proving Muse could also write "radio-friendly" rock tunes, as well as the 7 minute long epics on Origin of Symmetry. Muse polished off their impressive year by winning Best Live Band at the 2002 Kerrang! Awards.

In 2003, Muse asked Rich Costey to step behind the desk to help create Absolution. The album had very strong sales all over the world, and helped the band achieve their first UK number 1 album. Its release was preceded by a download-only single and online video for the song Stockholm Syndrome. Followed by the singles Time is Running Out and Hysteria, which charted well in the UK charts and helped Muse secure a headline spot at the 2004 Glastonbury Festival.

Glastonbury saw Muse storm troop onto the high table of classic Glastonbury headline acts and prove themselves a formidable force in British rock. Although many had their doubts at putting Muse on the bill with names such as Paul McCartney, Muse proved them all wrong and played what Bellamy described as "the best gig of our lives." It was only with that triumph fresh in their throats, they claim, that they realised they'd 'made it'. However tragedy struck just shortly after Muse came off stage when Dom Howard's father (a big Muse fan) collapsed after witnessing his son play and died on the site.

Later that year, Muse toured the US, promoting Absolution, before returning home to play two sell-out gigs at London's Earls Court at the end of the year.

In 2006 and after a long and exhaustive tour, the band returned to the studio, and released Black Holes and Revelations.Interview with Dominic 2006

With the LP, the band secured their second UK album chart number one, whilst reaching the top spot in several other countries, as well as a Top 10 in the US billboard chart. The controversial single Supermassive Black Hole became Muse's highest UK entry in the charts, reaching number four, and also scored high entries in other countries. The album's second single, Starlight, reached number 13 in the UK charts in September 2006. The 3rd UK single was fan-favourite Knights of Cydonia, released on November 27th, and it reached number 10 in the UK charts. The 4th single from Black Holes & Revelations was Invincible, and was released April 15th 2007. It entered the UK singles chart at 21st place, and was the first single from the new album not to enter in the Top 20. On November 2, 2006, the band won an award for Best Alternative Act at the annual MTV EMA in Copenhagen. Muse were also named 'Best Live Act' at the Brit Awards in 2006 and have retained the title in 2007.

Two of the album's singles reached the highest US Modern Rock chart positions in the band's career during 2007: Starlight reached #2 in February 2007, and the all-falsetto Supermassive Black Hole reached #6 in October. 2007 also saw the band play to sellouts at Madison Square Garden and the Forum in Los Angeles, as well as headlining Austin City Limits Festival and Lollapalooza.

Even when the band says they do not see themselves as a massive stadium band, their headline concert on June 16th 2007, at the rebuilt Wembley Stadium, sold out in 45 minutes six months before the gig and the band had to add a second show on June 17, where they proved to be more than worthy of stadium gigs. The Wembley gigs became two of the biggest hyped concerts of 2007. Already the gigs have been compared by music journalists to Live Aid and Queen gigs, also performed on the "Hallowed Ground." The band's next release, HAARP: Live from Wembley, is expected to be made up of footage from the June 17th show.

In July 2007, Bellamy confirmed that he has begun to work on a new studio album and new songs, some more in line with electronic or "dance" music and others more with classical or symphonic music. The band is also thinking of hiring an orchestra for some of them. He also revealed that the next album should be self-produced, in order to have more freedom.

In 2009, the band released The Resistance, which contained the successful single "Uprising", the band's first Top 40 pop hit in the United States (achieving this with very little radio airplay) and their first #1 on the Billboard Modern Rock Chart. Followup singles "Resistance" and "Undisclosed Desires" also proved successful.

The band's sixth album, "The 2nd Law", will be released on 1 October 2012. The album's first single, "Survival", is the official song of the 2012 Summer Olympics in London.

Will Of The People

Will Of The People (CDS)