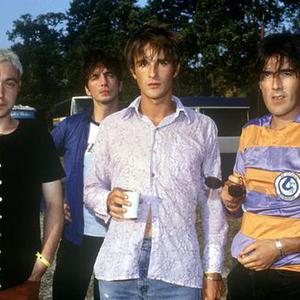 Longpigs were one of the more memorable bands who rose to fame on the fringe of Britpop in the 1990s, comprising Crispin Hunt (vocals), Richard Hawley (guitar), Simon Stafford (bass) and former Cabaret Voltaire member Dee Boyle (drums). The band name refers to the litteral translation of the word for 'human' or 'person' from cannibal tribal language. The group initially signed with Elektra Records in 1993. However, just before they released their first single, two tragedies struck the band.

The group initially signed with Elektra Records in 1993. However, just before they released their first single, two tragedies struck the band. Lead singer Hunt was seriously injured in a car accident resulting in his being in a coma for three days. Shortly after, the UK arm of the record label closed its doors leaving the Longpigs' future in doubt. Elektra set a price of ?500,000 to release them from their contract.

The Longpigs contract was purchased by U2's new record label, Mother Records. The band had a series of fortunate gigs, including opening for Echobelly, Supergrass and finally Radiohead in early 1995. Their first singles, Happy Again, She Said and Jesus Christ did little in the charts. The band played the 1995 Reading Festival and subsequently, new track All Hype was featured on the compilation CD Volume 14: Reading '95 Special.

Their next single, the poppy Far, managed to hit the UK Top 40. In March 1996, this was followed by the ballad On & On which received considerable radio play and hit the UK Top 20. The song had a guitar riff remarkably similar to Pink Floyd's Wish You Were Here. In April 1996 the band released their debut album The Sun Is Often Out, which was declared one of 1996's 50 best albums by both Q Magazine and Melody Maker. On the heels of their newfound success, the band then repackaged and re-released She Said which hit the UK top 30 in June 1996.

The band waited more than two years to release their next material, an eternity in the Britpop world. Their second album, Mobile Home, was released in 1999, with singles including Blue Skies and The Frank Sonata. Despite briefly reaching the UK top 20, the album failed to achieve any notable success. Dee Boyle left the band, and shortly after Mother Records folded in 2000, the rest of the band split up. Guitarist Richard Hawley went on to tour with Pulp.

In late 2004, Hunt lent his voice to the self-titled album by pop/electronic supergroup Mayonnaise on the Lunaticworks/BMG label. Richard Hawley has a flourishing solo career and has also worked with Jarvis Cocker in the electro group Relaxed Muscle. Hunt has since been seen recording with a new band, Gramercy with the help of Dylan Rippon (producer of albums by emma townsend) and Nigel Hoyle, once of Britpop-rockers Gay Dad.

On And On (The Anthology) CD2

On And On (The Anthology) CD1

The Sun Is Often Out