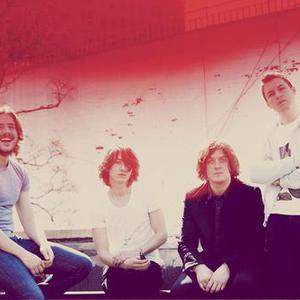 Arctic Monkeys are an indie rock band formed in Sheffield, South Yorkshire, England in 2002 after meeting at Stocksbridge High School. The band consists of Alex Turner (vocals, guitar), Jamie Cook (guitar), Nick O'Malley (bass) and Matt Helders (drums, vocals). Founding bassist Andy Nicholson left in 2006. The band has released four studio albums, "Whatever People Say I Am, That's What I'm Not" (2006), "Favourite Worst Nightmare" (2007), "Humbug" (2009) and "Suck It and See" (2011), all of which debuted at #1 on the UK Albums Chart.

Each of the band's first five singles I Bet You Look Good on the Dancefloor, When the Sun Goes Down, Leave Before The Lights Come On, Brianstorm and Fluorescent Adolescent hit the UK Top Five, but their sixth single, Teddy Picker, only went Top 20 and their seventh single, Crying Lightning peaked at #12.

The band's rise to success started in late 2004/early 2005 when demo songs which had been handed out in CD form at gigs found their way onto the internet. These demos rapidly spread among message boards and friends leading to a growing fan base for the band, and were collected on the unofficial Beneath the Boardwalk, which the band recognizes on their website. The band owe much of their success to viral buzz via the Internet, and have eschewed typical 'commercial' channels, including refusing to appear on the UK's (now discontinued) Top Of The Pops music program, which was often seen as a gateway to success.

The band's debut album, Whatever People Say I Am, That's What I'm Not, held the record for the largest first week sales of a debut album in the UK (in its first week, it sold more than the rest of the Top 20 albums combined). The album sold over 360,000 copies in its first week, but lost the title in November 2007 to Leona Lewis's album Spirit.

On 19th June 2006 the band officially announced that founding member Andy Nicholson had left the band after missing the American leg of their tour due to 'fatigue' and the other band members couldn't stand the constant 'missing his girlfriend syndrome' so told him to sling his hook. Former Dodgems bassist, Nick O'Malley was initially brought in as a stand-in, and played the band's remaining summer commitments. He was then announced as Nicholson's permanent replacement.

The single Leave Before The Lights Come On came out on August 14th, but only reached Number 4 on the UK charts, denying the band a third consecutive number 1 single.

Their debut album "Whatever People Say I Am, That's What I'm Not" won the 2006 Mercury Prize, was chosen as the best album of year 2006 by Q Magazine, and received a slew of other accolades.

Their second album Favourite Worst Nightmare was released on April 23rd 2007. It was preceded by "Brianstorm", the first single from the album, which was released a week before. Like its predecessor, "Favourite Worst Nightmare" sold more than the rest of the Top 20 combined, and - due to an error on iTunes - every song on the record appeared on the UK Top 200 Singles the next week.

The band began to write and record demos for the third album in January 2008, Turner said "We had tunes that we'd already been playing on tour so we recorded them. That's six [songs]. We're going to take it easy and start practicing over the summer and doing new stuff."

The band premiered new material from the unreleased album during their January 2009 tour of New Zealand, playing small venues in Wellington and Auckland ahead of the Big Day Out festival. Their first show in more than a year was on January 13, 2009 at Wellington's Town Hall. In both cities, the new songs played were "Crying Lightning", "Go-Kart", "Dangerous Animals" and "Pretty Visitors." The full set list from the Auckland gig is available online. Also played was a cover of the Nick Cave song "Red Right Hand." During their last tour, the band had played new songs "Put Me In A Terror Pocket", "Sandtrap," and "The Fire And The Thud" live.

Lead singer/songwriter Alex Turner started a two-man project with the singer from the Rascals, Miles Kane.
The band is called 'The Last Shadow Puppets'

The band released their new album Humbug in August of 2009, preceded by the single " Crying Lightning"

They released their fourth studio album, entitled Suck It And See on June 6th 2011

Why'd You Only Call Me When You're High? (CDS)