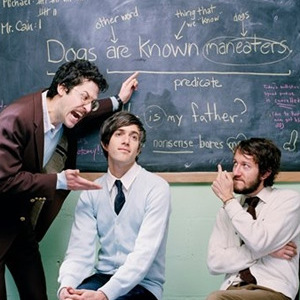 We Are Scientists is an American indie rock band featuring Keith Murray (guitar and lead vocals), Chris Cain (bass guitar and backing vocals), Max Hart (keys and guitar) and Andy Burrows (drums). Co-founder Michael Tapper (drums and backing vocals) left the band in 2007 and is currently a member of the bands Bishop Allen and Fool's Gold. They formed in 2000 in Claremont, California, United States.

Their name was inspired by an awkward conversation with a U-Haul employee who was inspecting a van that the band had rented. The U-haul employee, attempting to make polite conversation, asked the three bespectacled band members if they were brothers. They said no. He asked if they were scientists, as they looked like they could be the kind of people who wear lab coats. They told him that they were musicians, not scientists. To this day, they regret telling the truth. They are not named after the Cap'n Jazz song which bears the name.

The band has released three self-made EPs (Bitching!, Safety, Fun, and Learning (In That Order) and In Action). Their debut LP, With Love And Squalor was on Virgin Records, the first three singles of which were "Nobody Move, Nobody Get Hurt", "The Great Escape" and "It's A Hit". The album takes its name from the J.D. Salinger short story "For Esme - With Love and Squalor". They have since released LP Crap Attack, which is a collection of B-Sides, covers and other rarities, and their full follow-up album, Brain Thrust Mastery which debuted in the UK on March 17,2008 reached number 11 at the UK Album charts.

On the 1st November 2007, NME reported that Michael Tapper has left We Are Scientists under amicable circumstances, and on September 18, 2007, the band announced on their website that Max Hart, a keyboardist and guitarist who has played live with them before, has joined the band temporarily. As they put it: "There's no easy answer as to how long Max will stick around. Maybe we'll grow to hate his sanctimonious ways, which for now tickle us so. Maybe he'll grow to hate our open-minded, funny, refreshing, handsome ways, thus achieving what psychologists and bookies long ago labeled impossible."

And to make things even more exciting for the band, We Are Scientists is featured in the soundtrack of the 2008 film Nick & Norah's Infinite Playlist, which Bishop Allen - at the time featuring former We Are Scientists drummer Michael Tapper - appears in a cameo.

According to Keith Murray's Wikipedia he was nominated for World's Sexiest Vegetarian 2007 and is predicted that he will be the new face of Louis Vuitton's spring/summer '09 collection.

The Band's 3rd effort, Barbara, was released in June of 2010 and features ex-Razorlight drummer Andy Burrows.