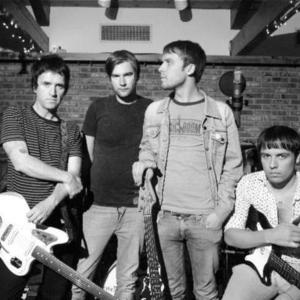 The Cribs are an English 3-piece indie band from Wakefield, West Yorkshire, England which formed in 2001 and consists of twins Gary and Ryan Jarman and their younger brother Ross. In August 2008 Johnny Marr, former guitarist for The Smiths and Modest Mouse, became the official fourth member of the band. On April 11th 2011, Marr's departure from the group was announced on their website, and The Cribs now continue as a 3-piece again.

They are signed to the Wichita Recordings label, and have currently released 4 albums through this imprint - 'The Cribs' (2004), 'The New Fellas' (2005), 'Mens Needs, Womens Needs, Whatever' (2007), and 'Ignore The Ignorant' (2009).
Despite starting off as an underground band, The Cribs have experienced commercial success with 'Mens Needs, Womens Needs, Whatever' charting at #13 in the UK album charts, and 'Ignore The Ignorant' achieving the band their first Top Ten album, charting at #8. They also have 7 top 40 hit singles to their name, the most successful of which being 'Men's Needs' (#17). In 2008, Q magazine described The Cribs as "The biggest cult band in the UK".
The Chi-Town Songfacts says that The Cribs' fifth studio album, In the Belly of the Brazen Bull, was recorded at London's Abbey Road and Chicago's EAR studio with famed lo-fi rock engineer Steve Albini and Tarbox Road studio in New York with David Fridmann (Mercury Rev, The Flaming Lips). It has a release date of May 7th 2012.

For All My Sisters (Deluxe Edition)

In the Belly of the Brazen Bull

Cheat On Me (CDS)