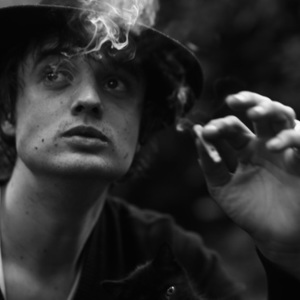 Peter Doherty is a UK singer-songwriter, currently fronting his band Babyshambles. Doherty first became known as co-frontman of The Libertines. Although The Libertines' exciting but short-lived existence lasted no more than two albums, the band left a lasting legacy on the current music scene, attracting a loyal fanbase with their 'band of the people' ethos and catchy songs. Doherty left The Libertines after continuously failing to honor his band's commitments, and because of the deteriorating relationship between him and Carl Bar&acirc;t; although the exact story behind this remains debatable.

Doherty left The Libertines after continuously failing to honor his band's commitments, and because of the deteriorating relationship between him and Carl Bar&acirc;t; although the exact story behind this remains debatable.

Doherty's post-Libertines work has been varied. He has distributed three sets of demos on the internet, an assortment of tracks written whilst with The Libertines, and some new songs. These works have attracted new fans and demonstrated him as a talented songwriter and guitarist.

Doherty has assembled a new band Babyshambles, who have, to date, released two albums, Down in Albion and Shotter's Nation, as well as The Blinding EP.

Doherty's debut solo album Grace/Wastelands was released March 16th 2009. The first single "Last of the English Roses" was released on March 9th. Mick Jones was replaced as producer for Doherty's newest solo album by Stephen Street, who produced Babyshambles second outing. Blur guitarist Graham Coxon was also recruited during the making of the album, his presence turning "Grace/Wastelands" into a calmer sounding album. This is a contrast to the earlier work of Doherty which often drew upon a more raucous, punk sound. However, "Grace/Wastelands" seems to draw more influence from the britpop era of the 1990's of which Graham Coxon's Blur were an integral part. These musical stylings combined with Doherty's quintessential use of lyrics and acoustic-guitar-led riffs have given the album a sound differentiating from Doherty's former works.

The Fantasy Life Of Poetry And Crime (Feat. Frédéric Lo)

Last Of The English Roses (CDS)

Last Of The English Roses (EP)