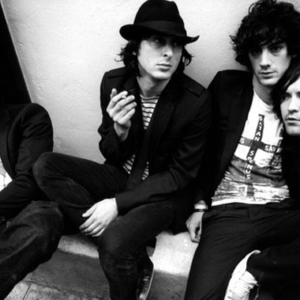 Dirty Pretty Things were a band fronted by former member of The Libertines Carl Bar?t. The formation of the band was announced in September 2005, after The Libertines had split up in 2004 due to a falling out between Bar?t and Peter Doherty. Bar?t had done some work with Vertigo Records and had previously revealed that his new project was with the label. Didz Hammond announced he was leaving The Cooper Temple Clause to join the band alongside ex-Libertines drummer Gary Powell and guitarist Anthony Rossomando, who had filled in for Doherty following his departure from the Libertines.

Dirty Pretty Things played their first shows in October 2005 in Italy and France.

Initially, the choice of name caused some troubles. A four-piece band from Salisbury had been playing as "Dirty Pretty Things" since early January of 2005, claiming to have already copyrighted the name in the UK; the two groups ended up coming to an agreement over the name. An Australian band had also been playing under that name since 2003, though since opted to change it.

The first track of the band's to be released on the CD format was "You Fucking Love It" which was made available on a free CD with the April 1, 2006 issue of NME entitled "NME and MTV2 present Best Newbands Showcase 2006".

The band's debut album, entitled Waterloo to Anywhere, was released on May 8, 2006 reaching #3 on the music charts and receiving critical approval. The first single (and first official band release) from the album, "Bang Bang, You're Dead", was released on April 24, 2006 and reached #5 in the singles chart in its first week of sales. The second single was "Deadwood", released on 10 July 2006 and got to #20 in the singles chart.

They toured extensively in the UK during the first half of 2006. Their setlist has comprised most of the songs from the debut album and selected b-sides, along with a few Libertines songs (usually "Death on the Stairs", "France", and "I Get Along"). They played their first American show at the SXSW festival in Texas. They played several festivals in the UK in the summer of 2006, including the Isle of Wight Festival, Wireless Festival, T in the Park, and they played at the Irish festival Oxegen.

'Wondering' was the third single released from Waterloo to Anywhere on September 25, 2006 and reached #34.

On a holiday in Taipei, Carl broke his collarbone (he had fallen from a motorbike during a drinking session), thus giving the impression that DPT would have to cancel a North American tour. However, the band recruited The Paddingtons Josh Hubbard to deputise for Bar?t on guitar.


On 16th October 2006 the band released a DVD 'Puffing On a Coffin Nail' featuring over 2 and a half hours of concert footage and documentaries.

On 25th October 2006 Carl appeared as a special guest at Paul Weller's set during the Electric Proms, duetting on Peacock Suite and In the City.

The band's second album "Romance At Short Notice" is set for release on the 30th June 2008.

The Band Split On Ist Oct 2008 Saying "It is with some sadness we announce the farewell of the Dirty Pretty Things," It's been a glorious three years which we all would gladly live out again, but it is time for us to try new things"