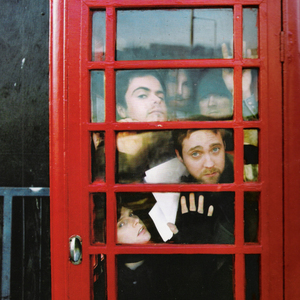 Kaiser Chiefs are a post-britpop band which formed in Leeds, West Yorkshire, England in early 2003. The band consists of Ricky Wilson (vocals), Andrew "Whitey" White (guitar), Simon Rix (bass), Nick "Peanut" Baines (keyboards) and Nick Hodgson (drums). The band has released four albums as of 2011 and have released 13 singles, including the hits I Predict A Riot, Oh My God, Ruby and Never Miss A Beat.

Several members of the band are ardent fans of the English football team Leeds United (as the band originates from Leeds). The band are named after the South African Kaizer Chiefs Football Club, the former team of long-serving former Leeds captain Lucas Radebe.

The band's main musical influences include The Beatles, The Beach Boys, The Kinks, Blur, Eric Burdon, The Jam, and other new wave bands. Andrew White (b. England; guitar), Ricky Wilson (b. Charles Richard Wilson, 17 January 1975, Keighley, West Yorkshire, England; vocals), Nick Baines (keyboards), Nick Hodgson (b. Nicholas Hodgson, 20 October 1977, England; drums) and Simon Rix (b. James Simon Rix, 18 October 1977, England; bass) formed the band in early 2003, having originally played garage rock under the Parva moniker. Their energetic brand of post-millennial guitar rock, which would have been branded "indie" in previous decades, quickly found favour on the local gig circuit. The quintet issued their debut, the XTC-soundalike Oh My God, before they had even signed a proper recording contract, teaming up with the Drowned In Sound website in May 2004 for a limited edition release. A contract with the B-Unique label followed and the band began to attract wider interest at the end of 2004 with the release of their storming I Predict A Riot. The topical lyrics, concerning alcohol-fuelled violence in small English towns, attracted as much attention as the band's anarchic update on late 70s new wave.

The band's explosion onto the global music scene in early 2005 was epitomised when they had their first single I Predict A Riot off their debut album Employment played on the radio around the world and opened Live8 in Philadelphia. Several years prior to 2003 the members of the band had been a garage rock group called Parva (before that they had been known as Runston Parva). However, after their label Mantra Records went bust in late 2002, the band went back to their roots and adopted a more britpop sound, helping the band reach their current popularity within the UK and beyond as a consequence.

The band re-released the single Oh My God on 21 February, which charted at #6. The debut album Employment was released on 7 March 2005 and entered the charts at #3 that week. Despite becoming favourite after being shortlisted, the album failed to win the 2005 Mercury Music Prize. They covered the Marvin Gaye classic, Heard It Through The Grapevine for the War Child album Help! A Day in the Life, giving a whole new slant on the song.

A DVD, entitled Enjoyment, was released in November 2005. The basis of the DVD is a (semi-false) documentary about the band narrated by Bill Nighy. It also includes all the promo videos, live performances and more.

An internet-only (so far) music video for their song Sink That Ship has been released in September 2005. The video appears on Electronic Arts' website as a promotional tool for their game Burnout Revenge but is completely unbranded.

Wilson auctioned off his red tambourine to radio show Xfm in late 2005 to raise money for the homeless charity Shelter. The winning bid was ?375.00.

On February 5th, The Kaiser Chiefs Released their next single, Ruby, which was a major success reaching #1 in the singles charts.

The Kaiser Chiefs released their new album, Yours Truly, Angry Mob on February 23, 2007 in The Netherlands and Belgium, February 26, 2007 in the United Kingdom and on March 27, 2007 in North America. A double disc edition is also available, the second disc being a DVD.

It is known that three of the band members went to a school near Highroyd, Leeds. Also, Nick (drummer) announced during a gig in Newcastle Upon Tyne that his dad went to a school called St. Cuthberts in Newcastle. Other famous people from that school include Ant & Dec and Sting.

The band released their third album, Off With Their Heads, on October 20, 2008. It contains the hit single Never Miss A Beat.

Songfacts states that the band's fourth album, The Future Is Medieval was released through the band's website on June 3, 2011. In effect the world's first bespoke album, fans are able to create their own version of the record by choosing their favorite 10 tracks from the selection of 20 on offer. One-minute excerpts allow them to make their selections and each song is represented by an object.
After creating their own album, people can then share their version of the record with other fans, and earn ?1 each time it is purchased by someone else.

Kaiser Chiefs' first big festival show was at the dual-site Reading and Leeds Festival on 27 August 2004 and in the following year, on 16 May 2005, they appeared at the Pinkpop Festival in Landgraaf, The Netherlands. After that, things went fast. They were the opening act at the Philadelphia Live 8 concert on July 2nd 2005, one of only two British acts in the lineup (Def Leppard being the other). They performed I Predict a Riot, Everyday I Love You Less and Less and Oh My God. They played Reading and Leeds in 2006 before Franz Ferdinand and were extremely popular.

June 2005 saw them headline at the May Ball at Queens' College, Cambridge, supported by Anada, before an acclaimed appearance at a rain-soaked Glastonbury festival during the same month, whilst August's appearance at the V Festival featured a very enthusiastic set despite Ricky Wilson having his leg in plaster. Also more recently they embarked on their own headline UK Tour, supported by Maximo Park and The Cribs. Their first US tour (with The Cribs) ran through the summer of 2005, and they followed it by playing a few shows on the Foozer tour. This was followed up by opening for Foo Fighters during their Australian tour in December 2005. They also played to Jools Holland and his audience on December 31, 2005.

Their song Ruby, from the album Yours Truly, Angry Mob was featured as a bonus song in Guitar Hero III, and I Predict A Riot from Employment was eventually released as downloadable content for the game.

Kaiser Chiefs are set to return to the European festival scene this summer, having been booked for Switzerland's Gurten Festival.

Start the Revolution Without Me

The Future Is Medieval