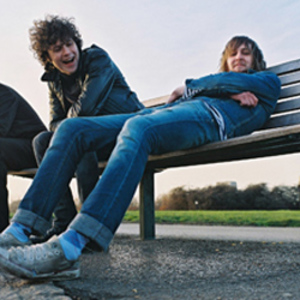 They toured with a pianist / rhythm guitarist, Will Foster. The band has released two albums, 2006's "Costello Music" and 2008's "Here We Stand".

They played their first show on March 4, 2005 in the O'Henry's bar in Glasgow across the road from the famous Horseshoe bar, and received their first radio play in 2005 on central Scotland's Beat 106 (later XFM Scotland, now Galaxy Scotland) Beatscene show hosted by Jim Gellatly. They were signed by Fallout Records.

The Fratellis EP was released April 3, 2006, featuring the tracks "Creepin' Up The Backstairs", "Stacie Anne" and "The Gutterati?". The NME ran a two page feature on The Fratellis in the August 10, 2006 issue, proclaiming them "the best new band in Britain". "Creepin' Up The Backstairs" was never a single released by the band, even though a video was made for it. It was not eligible for the charts. The first single released by the band was "Henrietta", which was released on June 12 2006 and charted at number 19 on the UK Charts.

Costello Music was the The Fratellis debut album and was released September 11, 2006. It charted at number two in the UK album charts for three weeks. The success of the album led to The Fratellis winning the BRIT award for Best British Breakthrough Act in 2007, an award that was voted for by BBC Radio One listeners.

The Fratellis supported Kasabian in December 2006 on their UK tour before playing 10 dates by themselves in February and March 2007. The locations included Nottingham, Manchester, Glasgow, Birmingham and London. Following the release of the album, The Fratellis embarked on a tour of the UK festival circuit, playing at Glastonbury and headlining at festivals such as NME's Rock 'n' Riot tour, OXEGEN 2007 and T in the Park 2007, amongst others. They also opened for The Police Reunion Tour in the summer of 2007 in some of the North America dates. The Fratellis also recorded some cover songs during the year including "All Along the Watchtower" for Radio 1's 40th Anniversary Double Album, Radio 1: Established 1967, and "Solid Gold Easy Action" for the soundtrack of the film "Hot Fuzz", which also included the single "Baby Fratelli"

On 1 October 2007, they released their first live DVD "Edgy In Brixton" in the UK, which was recorded at the Brixton Academy in London. The DVD contains a full live performance of the debut album Costello Music, B-Sides from various singles and a new song called Pretty Like a Girl. Extras on the DVD include the band being asked questions by members of The Fratellis' website, and on the deluxe edition, highlights from the T In The Park 2007 festival. It was released in the United States on the 30 October 2007

On November 20, 2007, it was announced on the Fratellis' official website that work had begun on the second album in rehearsal space in Glasgow. The band stated that they are self-producing the album and have their own studio to record in. Recording finished on January 13, 2008.

On February 22, 2008, they played a small show for fans at Queen Margaret Union to debut new songs from the upcoming album. About eight new songs from their new album were played, including "Mistress Mabel", "Acid Jazz Singer", and "Look Out Sunshine!". This performance introduced two new touring members, a guitarist called Robin and a keyboard player, Will Foster. However, after the Teenage Cancer Trust show in 2008, Robin departed the tour for unknown reasons. Will Foster now plays both Keyboard and Guitar during live performances.

The album, called Here We Stand, was released on June 9, 2008 in the UK and June 10, 2008 in the US. The band marked the US release of the album with sold-out shows in New York City, Boston, and Los Angeles. The first single from the album was called "Mistress Mabel" and was released on May 26, 2008. The next single was Look Out Sunshine!, released on 18th of August 2008 and with money going towards the Teenage Cancer Trust. The third single was A Heady Tale, released on December 22nd. The Fratellis released a deluxe edition of Here We Stand internationally on December the 8th. The CD includes a new song titled 'Moriarty's Last Stand' and the accompanying DVD includes "The Year Of The Thief" (A documentary of the band on the road in the US); A live show filmed on June 18th 2008 at the Fillmore, San Francisco; performances of Milk and Money, Flathead and Mistress Mabel from Abbey Road Studios and the videos for the singles Mistress Mabel and Look Out Sunshine!
On April, 22 2010, both singer Jon Lawler and bassist Barry Wallace posted messages on their forum saying the band are unlikely to record together again soon.

The Fratellis have announced during June 2012 that they have decided to reform to help raise money for The Eilidh Brown Memorial Fund on the 15th of June at the MacRobert Centre in Stirling. The band plans on announcing more dates for later in the year.

Half Drunk Under A Full Moon (Deluxe Edition)

Half Drunk Under a Full Moon

In Your Own Sweet Time