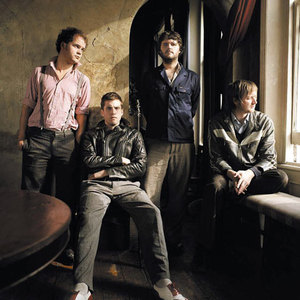 The Rumble Strips is a ska/pop/rockabilly/soul/trumpet band originating from South Devon town Tavistock, near Plymouth, but are now based in London, having moved to further their musical career. The band released debut album, Girls and Weather, in September of 2007. In the past, the band have been on tour with numerous popular artists (The Zutons, Good Shoes, Dirty Pretty Things and The Young Knives), and have also played various festivals (including Glastonbury 07 and Cardiff Calling 07).

The band also had a successful album tour hitting many venues around the UK and Ireland, including a trip to home-town Tavistock. The album (created with Tony Hoffer - The Kooks, and The Fratellis), was released mid-September 2007. The band gained alot of recognition when single "Alarm Clock" was played on Radio 1, when lead singer of Snow Patrol took over Zane Lowe's evening slot as a one-off.

Past releases include the single "Motorcycle" (December 2005 and re-released June 07), single "Hate Me (You Do)" (June 2006) EP "Cardboard Coloured Dreams" (November 2006), single "Alarm Clock" (March 2007), which has received numerous plays off of Virgin Radio and on MTV 2 programme "Spanking New Music", and single "Motorcycle" (June 2007) which also received plays off of "Spanking New Music".
"Girls and Boys In Love" is the most recent song to have been released as a single, and also features in the Simon Pegg film "Run Fat Boy Run" and "Angus, Thongs and Perfect Snogging"

Lead singer, Charlie Waller, was also in the band Vincent Vincent And The Villains at the same time as playing with current band The Rumble Strips. An attack from his conscience lead him to leave both bands before The Rumble Strips were offered to release a single under record label Transgressive.

Welcome To The Walk Alone