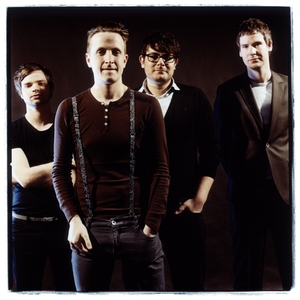 The Futureheads formed in 2000 in Sunderland, England, United Kingdom or more specifically, in Barry's garage. The line-up of the band at that point was Jaff (Bass, Vocals), Barry Hyde (Guitar, Vocals), Ross Millard (Guitar, Vocals), and Peter Brewis (Drums, Vocals), now of cerebral pop-masterpiece-makers Field Music. After playing countless hometown shows, the Futureheads took the show on the road with a massive helping hand from Slampt Records' Milky Wimpshake. A tour of Squats and Youth Centres in Central Europe came in summer 2001, due to which the band switched out drummers.

After playing countless hometown shows, the Futureheads took the show on the road with a massive helping hand from Slampt Records' Milky Wimpshake. A tour of Squats and Youth Centres in Central Europe came in summer 2001, due to which the band switched out drummers. In place of Peter Brewis ambled a young pretender, Mr David Hyde (Drums, Vocals).

Several singles followed - the first, Nul Book Standard, can now be seen casually hanging out on eBay from time to time. A relationship with the lovely people at Fantastic Plastic briefly followed. 'The Futureheads' was released in summer 2004, on 679 Recordings, and then the band hit the road. Some highlights of 2005 include playing Glastonbury Festival on Baz's birthday, Hounds Of Love going Top Ten, meeting Dennis Hopper on Jimmy Kimmel's US TV Show, and getting that most infamous of Albatrosses, The Second Album under their belts.

?News and Tributes' was released in May 2006. It reached 11 in the album chart, and saw the band touring the world and continuing to win fans and supporters with their exhilarating live shows.

Fast forward to 2008, and The Futureheads are back, bolder and better than ever, exploding back onto the scene with their new album ?This Is Not The World'. Embracing the punk-rock ethic like never before, Barry, Ross, Jaff and Dave are releasing their third album independently and taking control of their own destiny. It's going to feel like the first time, all over again?

Annoyed and frustrated too many times by the bureaucratic nightmare that music had become, the band split with former label 679 in late 2006. A silently busy year followed which saw the band writing and recording, and launching their own label Nul Records, solely to release music by The Futureheads. Free of major label shackles, the band are taking back control and relishing being their own bosses.

?This Is Not The World' was recorded in 3 weeks in the summer with super-producer Youth at his studio ?Space Mountain' in the Sierra Nevada mountain range in Andalusia. About as far away atmospherically as you can get from the bleak Scarborough farm in which they recorded ?News And Tributes', the band couldn't help but be influenced by Youth's enthusiasm, and describe the album as one of ?defiance, optimism and joy.'

Keen to share the joy with fans, the band released 2 tracks as free downloads and played intimate shows in London and Sunderland at the end of 2007. They begin 2008 with a tour of uni venues and kick off the year with storming new single ?The Beginning Of The Twist', released March 10th.

This Is Not The World