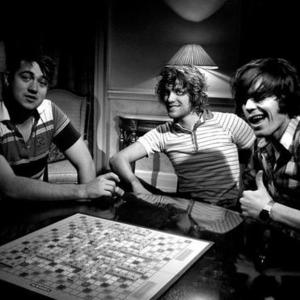 Pull Tiger Tail were a british indie band who were formed at Goldsmiths College in London, England in 2005 - all three members had grown up together in Stratford-upon-Avon and shared a flat together when moving to London to attend Goldsmiths. They consisted of Marcus Ratcliff (vocals, guitar, keys), Davo McKenzie-McConville (bass, moog, keys, drum pads, vocals) and Jack Hamson (drums, vocals) and they played their first gig in Feburary 2006...

You can preview tracks at their Myspace page: http://myspace.com/pulltigertail or get their second single "Mr 100 Percent" (released as a free download on December 11th 2006) for free from their website.

The fourth and final B-Unique single, "Hurricanes" was released on 11th June 2007. An iTunes error prevented the single hitting the Top 40, and because of this, B-Unique dropped the band and kept hold of the debut album, resulting in Pull Tiger Tail being involved in a lengthy legal battle to get it back.

In 2008 their official website was relocated to http://www.pulltigertail.net from its old .com address due a spammer stealing the .com address.

On August 18th 2009 after much delay Pull Tiger Tail's debut album "PAWS." was finally released, only for the band to announce that they would split after a mini-tour. The digital-only b-sides and rarities album "The Lost World" was released on 14th December, supposedly an iTunes exclusive, although it has become available on 7digital with different artwork. In 2010, Jack Hamson became the drummer for the folk group Noah and the Whale after the band's drummer Doug Fink left to pursue a career in medicine.