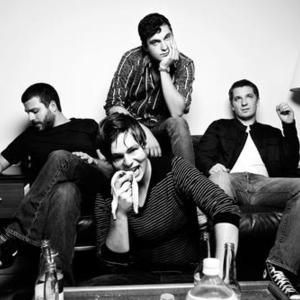 The Takeover UK successfully take the pop sensibility of the ?60s and marry it with Class of ?77 punk rock. Unabashedly pop, with a punk attitude shining through thick power chords and vocals that teeter between sugar and snarl...this IS exciting pop music. Huge hooks and smashing choruses flirt with one another in songs such as ?Ah La La,? while the band's inherent charm shines through in tracks, ?Evelyn? and ?The Lonely Ones.? The Takeover UK are as charismatic on record as they are live, with an astonishing ability to craft scores of classic songs that make people move.

Having two prolific singer/songwriters, a band like this doesn't come around that often.

The debut EP "It's All Happening", is out May 20, followed by the full-length, "Running with the Wasters", coming in September from Rykodisc.

?Pop is not a dirty word,? says Mark Solomich (vocals, guitar). ?We love the art form. We are chasing the perfect pop single.?

Running With The Wasters