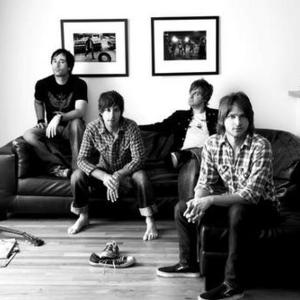 American Hi-Fi is a rock band originally from Boston, Massachusetts, best known for their 2001 hit Flavor Of The Weak. Their musical style incorporates various elements of the pop punk, power pop, alternative rock, and pop rock genres. To date they have released Four studio albums, as well as two live albums. Their self-titled album (2001, Island Records) was their best known release, with singles Flavor Of The Weak and Another Perfect Day.

To date they have released Four studio albums, as well as two live albums. Their self-titled album (2001, Island Records) was their best known release, with singles Flavor Of The Weak and Another Perfect Day. Their 2003 follow up album Art of Losing had a slightly rockier edge to it and includes the singles The Art of Losing and The Breakup Song (both of which appeared on various movie soundtracks). However the album failed to meet the success of their first album and they were dropped by Island Records. Their third studio album Hearts on Parade was released by Maverick Records in 2005 with a much more poppy sound. It included the singles The Geeks Get the Girls and Hell Yeah!. There was much division between fans due to the "new sound" and poor record sales meant Maverick dropped American Hi-Fi in Autumn of 2005.
The band retured after 5 years, releasing their forth studio album Fight the Frequency but the album did not follow any sort of promotion nor much tour for support of the album.
As of 2012, the band is currently working on a new studio album and are now signed with Goomba Music.

American Hi-Fi have also released 2 Live albums. One released only in Japan called Rock N' Roll Noodle Shop: Live From Tokyo through Universal. The album is a live recording of a concert performed in Tokyo and includes mainly tracks from the self-titled album. However, it does include an early version of the track Teenage Alien Nation titled Waking Up to the End of the World, Happy (both from the Art of Losing Album) and cover of the Cheap Trick song Surrender.
The second live album was Live from Milwaukee.

According to an radio interview given by the band in 2001, their name came from a chance meeting with Keith Richards at a club. When they mentioned to him that they were looking for a name, he suggested "American Hi-Fi."

Frontman and founding member Stacy Jones previously drummed for the often mis-labelled all girl punk rock outfit Veruca Salt on their Eight Arms To Hold You tour but never recorded for the band leaving in 1998 to start American Hi-Fi.

Jones is a renowned producer and songwriter and has produced a mixed bag of artists from Hana Montana to Towers Of London, also playing drums on various Miley Cyrus and Hannah Montana tracks. Jones is also married to international photographer Jade Loop.

Anywhere Else But Here

The Geeks Get The Girls (MCD)

Flavor Of The Weak (MCD)