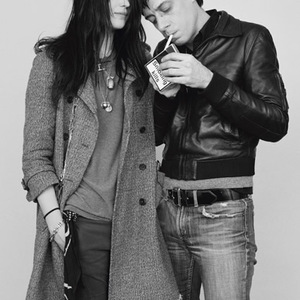 The Kills are an alternative rock duo formed by American vocalist Alison "VV" Mosshart and British guitarist Jamie "Hotel" Hince that rose to public recognition at the dawn of the hype surrounding the genre explosion of the early 2000s. Mosshart had been in the Florida punk band Discount and Hince in British rock band Scarfo. When these groups disbanded, the duo, who first met when Mosshart heard Hince practicing in the hotel room above hers, struck up a songwriting partnership.

For months, the pair air mailed work tapes across the Atlantic; after this proved to test the patience of both artists, as it took days or weeks to get each others tapes, Mosshart upped sticks from her Florida home to fly to London.

Wanting to cut themselves off from their pasts, Mosshart and Hince considered their new project to be Year Zero in their careers, so they renamed themselves "VV" and "Hotel" respectively and began writing sparse, minimalist songs together with the aid of a drum machine. In 2001 they showcased their new songs on a well received demo tape. In true punk rock fashion, however, the pair shunned approaches from major record labels. Recording as VV and Hotel, they contributed the song "Restaurant Blouse" to the compilation If the Twenty-First Century Did Not Exist, It Would Be Necessary to Invent It. Shortly after this they recorded their debut release, the Black Rooster EP, which saw release on British indie label Domino Records and was picked up for distribution by Dim Mak Records in the United States.

Following international touring, they entered Toe Rag studios to record their debut album Keep On Your Mean Side, mostly on 8-track, in just 2 weeks.
Popular indie band, the xx, name The Kills as the major influence for having a male/female lead singer combo: http://edition.cnn.com/2010/SHOWBIZ/Music/04/05/xx.interview/index.html?iref=allsearch
Their second album, No Wow, was released by Domino records on February 21, 2005. Featuring an artier, less guitar rock sound, the record embraced New Wave and post punk influences and sounded even more stripped down than Keep on Your Mean Side. The first single, The Good Ones, was released on February 7, 2005 and reached number 23 in the UK singles charts.

Their third album Midnight Boom was released March 10, 2008. It was followed by 5 different singles since its release.

Doing It To Death (CDS)