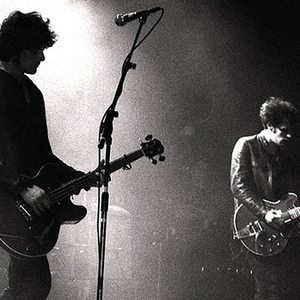 Black Rebel Motorcycle Club is a rock band from San Francisco, United States now based in Los Angeles. The band formed in 1998, influenced by much classic rock music of the past six decades, particularly the Jesus and Mary Chain and Love and Rockets. Their style also encompassed slower-paced grooves influenced by shoegaze. The band's second album 'Take Them On, On Your Own' featured several songs ('Generation' and 'US Government') which were critical of the United States' foreign policy and George Bush in particular.

The band's second album 'Take Them On, On Your Own' featured several songs ('Generation' and 'US Government') which were critical of the United States' foreign policy and George Bush in particular.

After conflict with their label (Virgin Records), the band was dropped in 2004. Nick Jago left the band at the end of their summer tour in the same year due to "internal conflict".

Following Jago's departure Peter Hayes and Robert Levon Been regrouped and recorded the band's third album. With their third record Howl, they added blues, folk and gospel, a la Spiritualized.

In 2005 the band inked a new deal with Echo in the UK, and RCA in the US. Nick Jago also returned to the fold. The band's third album "Howl" was released that same year to widespread critical acclaim. Jago returned after most of the album was recorded but played on "Promise".

"Baby 81" the band's fourth album was released on May 1st, 2007. In June 2008 Nick Jago once again left the touring line-up of the band being replaced by The Raveonettes' touring drummer Leah Shapiro. Nick stated that "...I am fired again and to be honest with you I respect their decision".

However Hayes and Been released a conflicting joint statement that read "Nick won't be joining us for the upcoming European tour, but it's not true that he is fired. We just feel Nick needs time to sort out exactly what he wants right now. His heart and all his energy and attention is on his own solo project and he needs to see that through".

Specter At The Feast

Take Them On On Your Own