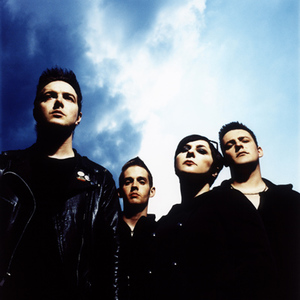 Glasvegas are a Scottish indie rock band from Glasgow, Scotland. The band consists of James Allan (vocals), Rab Allan (lead guitar), Paul Donoghue (bass guitar) and Jonna L?fgren (drums). The band received critical acclaim for their debut album Glasvegas which was released in September 2008, reaching No.?2 in the UK Album Charts and was nominated for the Mercury Music Prize in September 2009. The NME declared, "If The Libertines defined the start of the decade and Arctic Monkeys its middle, then Glasvegas are almost certainly going to define its end and beyond.

Their debut album went on to enjoy success in the UK (where it went Platinum) and in Sweden (where it went Gold). The impact of the band in the UK and success of their debut album did not go unnoticed in North America, which saw the band tour an unprecedented six times between October 2008 and September 2009. The band have mentioned on many occasions during interviews of their commitment to making the breakthrough in the USA and Canada. On 14 December 2010, the band announced the appointment of their new drummer, Jonna L?fgren from Boden in Sweden.

Glasvegas's second album /// Euphoric Heartbreak \\\ was released on 4 April 2011 reaching No.10 in the UK and No.1 in Sweden, receiving critical acclaim. The band then moved onto their biggest headline European tour to date in April/May 2011. The highlight of the tour came on the 19th May 2011 when Glasvegas headlined and sold out the 3500 capacity Globans Annex in Stockholm. A seventh tour of the USA was followed by a first visit to Australia in July/August 2011.

In October 2011 the band were asked by U2 to cover Acrobat for the 20th Anniversary of Achtung Baby. The album was called AHK-toong BAY-bi Covered and was released by Q magazine.

In 2012 the band made their first trip to China and an intimate tour of the UK has been announced for December 2012. The band have announced plans to release a 3rd album in 2013 on their own label.

Later...When The Tv Turns To Static

The World Is Yours (CDS)

A Snowflake Fell (And It Felt Like A Kiss)