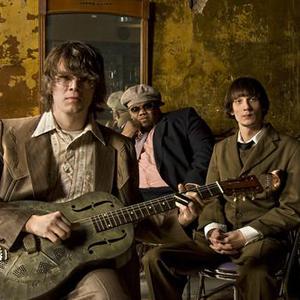 North Mississippi Allstars is an American rock/blues jam band from Hernando, Mississippi, founded in 1996. The band is composed of brothers Luther Dickinson (guitar, vocals) and Cody Dickinson (drums, keyboards, electric washboard), and Chris Chew (electric bass guitar). Duwayne Burnside, who formerly played second guitar in the band, is a son of R.L. Burnside (who has also played on some of the band's tracks).

The Allstars' first release, Shake Hands With Shorty, was nominated for a Grammy Award for "Best Contemporary Blues Album". Since then, 51 Phantom and Electric Blue Watermelon have received nominations in that same category. The group also won a Blues Music Award for "Best New Artist Debut" in 2001.

The band has been the backing band for John Hiatt, including appearing on the album "Master of Disaster".

All the members of the Allstars have also teamed up with Robert Randolph and John Medeski to form The Word.

In November 2007, Luther Dickinson joined The Black Crowes as lead guitarist, and has appeared on their albums Warpaint (2008), Before the Frost...Until the Freeze (2009) and Croweology (2010). Luther Dickinson currently devotes his time to both the Black Crowes and the North Mississippi Allstars. Cody Dickinson has also started a side project, Hill Country Revue, featuring Daniel Coburn, Kirk Smithhart, Doc Samba and Ed Cleveland. They are sometimes joined by Luther Dickinson and members of the Burnside family. They have released two albums, Make A Move (2009) and Zebra Ranch (2010),

The mid-90s were a special time for modern Mississippi country blues. RL Burnside, Jr. Kimbrough, Otha Turner and their musical families were at their peak; touring the world, making classic records and doing the all-night boogie at Jr's Juke Joint and Otha's BBQ Goat picnics -- the music and the culture rich as the black Mississippi dirt. Brothers Luther and Cody Dickinson soaked up the music of their father, Jim Dickinson, and absorbed the North Mississippi Blues legacy while playing and shaking it down at the juke joints with their blues ancestors. Luther (guitar and vocals) and Cody (drums and vocals) joined up with bassist Chris Chew to form the core of their own band, The North Mississippi Allstars. Through the filter of generations of Mississippi Blues men, the Allstars pioneered their own blues-infused rock and roll and continue to do so.

The band hit the road with the release of their first record, Shake Hands With Shorty, Grammy-nominated for ?Best Contemporary Blues Album.? Bringing their hill country blues-infused rock & roll to stages all over the country and the world (including multiple tours in Europe and Asia), the Allstars quickly gained a loyal fan base, and to date have released six full-length albums. The bands's third record, Phantom Record also received a Grammy nod.

Electric Blue Watermelon, their third album to receive a Grammy nomination, embodies the Allstars' own sound. It reflects the band's old times and lives growing up in their musical community in North Mississippi. ?The record holds to the folk tradition of oral history,? as Luther Dickinson puts it. ?Electric Blue Watermelon celebrates the lives and legends of men who are folk heroes in my community. If the traditions are passed down and kept alive, they can't help but mutate and change.? Electric Blue Watermelon is certainly a departure from the blues tradition, but it is a record that reaches in the future and back into the past. It's loud psychedelic southern folk rock blues.

Live In The Hills Volume II

Keys To The Kingdom

Live In The Hills