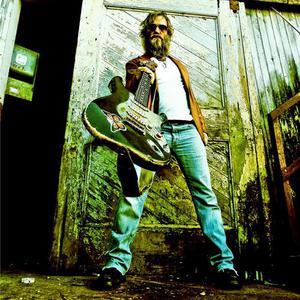 Anders Osborne (born in 1966 in Uddevalla, Sweden) is a Swedish-born American singer-songwriter based, since 1985, in New Orleans. ?I'm in the promised land,? says proud American immigrant and Grammy-winning singer/songwriter/guitarist Osborne. The Swedish-born, longtime New Orleans resident is among the most original and visionary musicians performing today. In a city overflowing with stellar artists, bands and performers, Osborne is one of the Big Easy's favorite musical heroes. His Alligator Records debut, American Patchwork, is a moving collection of soul-baring rock, blues and ballads.

?I'm in the promised land,? says proud American immigrant and Grammy-winning singer/songwriter/guitarist Osborne. The Swedish-born, longtime New Orleans resident is among the most original and visionary musicians performing today. In a city overflowing with stellar artists, bands and performers, Osborne is one of the Big Easy's favorite musical heroes. His Alligator Records debut, American Patchwork, is a moving collection of soul-baring rock, blues and ballads. Many of the songs on American Patchwork deal with healing and redemption, spirituality and acceptance. It is about rebuilding what has been destroyed, not only a ravaged city, but also a hollow man. Often compared to Townes Van Zandt, Bruce Springsteen and Van Morrison, Osborne is an exceptional and singular talent. Paste Magazine says, ?Osborne has an impossibly great, soulful voice and the songs to match.? Living Blues adds, ?Osborne is a songwriter of enormous depth and an incredibly passionate musician.?

Osborne and friend Stanton Moore (Galactic) produced American Patchwork, with co-production by Pepper Keenan (of Down and Corrosion Of Conformity). Osborne wrote all ten songs, all imbued with serious lyrical depth, unforgettable melodies and performed with soul muscle. The guitar work is simply spectacular. His vocals soar with natural, emotional power. With musical assistance from Moore on drums, Keenan on percussion and guitar, and Robert Walter on keyboards, American Patchwork is nothing short of a career-defining release for Osborne, and a bright new chapter in his remarkable journey. As far as Osborne is concerned, American Patchwork is a triumphant achievement. ?Every note has a purpose, a serious focus. As I was writing it and recording it, everything fell right into place.?

Live, Osborne is a force to behold. His wildly energetic, physical live performances find him ripping notes out of his guitar, forcing out riveting steel-on-steel slide solos, pouring his entire soul into his vocals. His ability to ignite an audience is legendary. Past gigs include repeated appearances at The New Orleans Jazz & Heritage Festival, stops at Bonnaroo, The High Sierra Festival, The Telluride Blues Festival, The Hollowbaloo Music & Arts Festival in Honolulu, The Voice Of The Wetlands and even an appearance at the 2008 Democratic National Convention. He has toured North America and Europe extensively, and has performed with The Meters, Randy Newman, Buddy Guy, Taj Mahal and Little Feat among many others.

As a songwriter and singer, Osborne stands tall. Since his recording debut in 1989, he has written virtually all of his own material and contributed memorable songs to a wide variety of artists. Two tunes co-written by Osborne appear on blues great Keb Mo's Grammy-winning 1999 release, Slow Down. Country superstar Tim McGraw scored a #1 hit with Anders' song Watch ?The Wind Blow By.? Osborne's compositions have been covered by artists as diverse as Brad Paisley, Tab Benoit, Jonny Lang and Kim Carnes. His song ?What's Going On Here? appeared in the 1996 feature film Fled, and Osborne, along with Ivan Neville, wrote and recorded the title track for the 2010 Kate Hudson film Earthbound.

But it is not just his live performances and songwriting that make Osborne such a success. He is also revered for his jaw-dropping guitar playing. His piercing slide-work and fluid finger picking (oftentimes happening simultaneously) are simply unmatched. His use of Open D tuning (a rare choice for a guitar virtuoso) gives his fretwork a signature sound and feel. ?I first heard Open D on Joni Mitchell's Blue,? he says, ?and my fingers just fit the tuning.? His influences range from Ry Cooder and Robert Johnson to the great horn players like Miles Davis and John Coltrane. Always an in-demand guitarist, Osborne has appeared on a host of recordings by Keb Mo, Tab Benoit, Mike Zito and others. Most recently, Anders lent his guitar talents to Dark Water, Galactic's first single from their new Ya-Ka-May CD.

Osborne was born in Uddevalla, Sweden in 1966. His father was a professional touring jazz drummer who played all over Europe and was exposed to a lot of popular American styles of music. He brought home reel-to-reel recordings of jazz, R&B and early rock ?n' roll from artists as diverse as Little Richard, Fats Domino, Bill Haley, Art Pepper and Miles Davis. As a teen, Anders started playing guitar and listening to Bob Dylan, Neil Young, Jackson Browne, and Joni Mitchell records. He fell in love with the vocal styles of Ray Charles, Van Morrison and Lowell George. Then he heard the blues of Robert Johnson and recordings of African drumming, and suddenly, everything clicked. ?Blues connected everything together for me,? Osborne recalls. ?The early rock, the R&B, the jazz, the singer-songwriters. Blues was like a thread running through everything.?

With a serious case of wanderlust, Anders began traveling on his own at 16. For the next four years he hitchhiked across Europe, North Africa, Southeast Asia and the Middle East, earning money by doing odd jobs and performing on the street or in bars at every opportunity. He worked assembly lines in Israel and dug ditches in Greece. He picked fruits and vegetables in many locales, following the harvest seasons across Europe. He wrote constantly, soaking up the life experience and honing his craft.

In 1985 he landed in New Orleans, a place his grandfather, a sailor, had often told him vivid stories about. When he arrived, he instantly felt right at home. ?My grandfather had a lot to do with me settling here,? recalls Osborne. ?He would send me postcards and photographs of him in New Orleans. I just felt connected to his memories. Once I got here, everything I heard in my head?the music, the way people treated each other?was happening. I knew I was home.? He effortlessly incorporated the sounds of the Crescent City into his own music, and the city quickly became a large part of his soul.

Anders spent his first few years in New Orleans writing and developing his sound and style, all the while continuing to soak up the music of the city. He cut his first two albums for the independent New Orleans-based Rabadash Records in 1989 and 1993. The excitement surrounding those releases led to a major label deal with Sony's Okeh imprint in 1995. Since then, Osborne has released a series of successful albums for Shanachie and MC Records, all to wide critical and popular acclaim.

With the release of American Patchwork, Osborne will hit the road hard. In April 2010, he will play three times at the New Orleans Jazz & Heritage Festival (and make many more area appearances during the festival period). He will then start a six-week tour of the U.S. on a double bill with The Stanton Moore Trio, followed by further touring with his own band.

Blues Revue describes Osborne's music as ?an articulate and spellbinding tapestry of sorrow and joy.? New Orleans' Times-Picayune says Osborne's music is ?genuine, focused and uplifting...guitar fireworks and a well-traveled voice.? The Newark Star-Ledger simply says, ?This guy is in his own universe. Comparisons are meaningless.? Now, with a new label, a new recording, and a new appreciation of life itself, Anders Osborne is ready to fulfill his huge potential. As a youth he traveled the globe before settling in New Orleans. Now, he'll travel from New Orleans, bringing his powerful original songs and soulful, blues-inspired, rock-fueled music to destinations all over the world.
www.andersosborne.com

Orpheus And The Mermaids

Buddha And The Blues