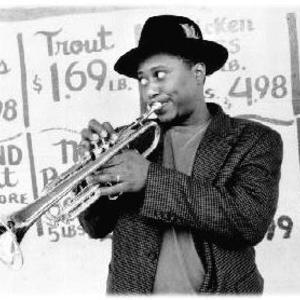 Originally a founding member in the 1980's of New Orleans' popular ReBirth Brass Band, with whom he recorded seven lively albums and toured the world. Ruffins branched out on his own in the early 1990's with his own band, a more traditional New Orleans jazz combo, but has also performed with The Kermit Ruffins Big Band. His style is most reminiscent of great Nawlin's trumpeter Louis Armstrong, He regularly performs with his backing band called the Barbecue Swingers in local New Orleans clubs.

Ingeniously, he also shows up with a truck that sells Bar BQ off to the side, easily doubling a night's musician pay, satisfying fans stomach as well as spirit. He's also guested on many recordings including records from artists like Los Hombres Calientes and Harry Connick Jr.

Have A Crazy Cool Christmas