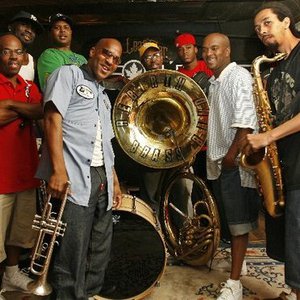 The Rebirth Brass Band is a New Orleans brass band. The group was founded in 1983 by tuba player Philip Frazier, his brother Keith Frazier and trumpeter Kermit Ruffins, along with other musicians with them at the Joseph S. Clark Sr. High School in the Treme neighborhood of New Orleans. Rebirth is known for combining traditional New Orleans brass band music, including the New Orleans tradition of second line with funk, jazz, and soul influences. In 1992, Ruffins and Rebirth split amicably after Ruffins decided not to accompany the band on a trip to Africa.

Ruffins later formed his own Band, the Barbacue Swingers, who play a more traditional style of New Orleans jazz music. Rebirth's longstanding regular Tuesday night gig at the Maple Leaf Bar in New Orleans is one of the pillars of the New Orleans music scene, and has served as a reliable introduction to the city's nightlife for many newly arrived college students. The band regularly tours in North America and Europe, second only to the Dirty Dozen Brass Band in popularity and acclaim among the brass bands of New Orleans.
2011 Grammy winner, Rebirth Brass Band, for best regional roots music album.