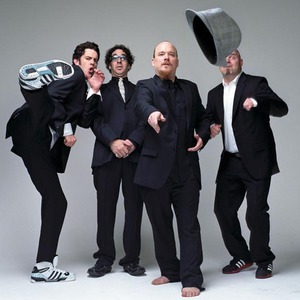 G. Love & Special Sauce is an alternative blues band from Philadelphia, Pennsylvania. Formed in 1992, the group (Garrett Dutton, better known as G. Love, Jeffrey Clemens on drums, Mark Boyce on keyboards, and Timo Shanko on bass) are known for their unique "laid back" blues sound. The group released their self-titled first album in 1994 on Okeh/Epic, a subsidiary of Sony Music. On the strength of the single "Cold Beverage", in part due to MTV rotation, the album nearly went gold.

The group released their self-titled first album in 1994 on Okeh/Epic, a subsidiary of Sony Music. On the strength of the single "Cold Beverage", in part due to MTV rotation, the album nearly went gold. After which, trying to capitalize on the success of the album, the group toured heavily, eventually landing a spot on the H.O.R.D.E. tour.

In 1995 they released their follow up album Coast To Coast Motel. Though it did not sell as well as the first album, it is generally considered among critics as the stronger of the two albums.

On tour following the release of the second album the group nearly broke up, due to bickering about finances. Deciding on a hiatus the three members went their separate ways, working on various side projects.

By October 1997 the group had reconciled their differences and released their third album, Yeah, it's That Easy, which along with their own work, showcased their collaboration with several other bands and musicians, including All Fellas Band, Philly Cartel, King's Court, and Dr. John. This soul-influenced album was more similar to their debut album than their previous release.

Soon after G. Love & Special Sauce set out on another world tour, returning to Philadelphia in 1999 for the release of their fourth album, Philadelphonic. Philadelphonic was followed up with Electric Mile in 2001, an album that shows the wide-ranging influences of the group, incorporating hip-hop, funk, psychedlia, blues, and soul in equal and ambitious measure. Ever the road band, the release of "Electric Mile" was followed by extensive touring.

By 2004 and The Hustle, G. Love (with the help of his bandmates and others) went solo and had eased up a little on the kitchen sink approach, offering instead a cohesive, dry groove reminiscent of his earliest efforts. Hustle was also the first G. Love release under Jack Johnson's brushfire records banner; the two had been pals at least since Philadelphonic, which Johnson had been a guest on.

Special Sauce did a series of shows in 2004 with Jack Johnson and fellow Brushfire artist Donavon Frankenreiter, and the trio also found time to issue a brief live EP, titled Some Live Songs.

In the summer 2005, the band was featured (along with the less well known Philly local Chuck Treece of 80's skate-rock band McRad) in an advertisement for the launch of Coca-Cola Zero, featuring the groups own unique version of the noted Coca-Cola advertising song I'd Like to Teach the World to Sing.

G. Love still continues to tour with the Special Sauce in the meantime.

Coming Back Home For Christmas

The Best Of G. Love And Special Sauce