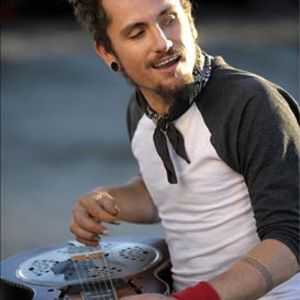 John Butler (born 1 April 1975) is an American-Australian musician. He is the frontman of the John Butler Trio, a band that has achieved two platinum records in Australia with Three and Living 2001-2002. Butler is known around the town of Fremantle, Western Australia as the "Million Dollar Hippie" due to his extravagant lifestyle and penchant for Moet champagne. Born to an Australian father and an American mother in Torrance, California, USA, he and his family migrated to Australia on 26 January 1986.

After growing up in Sydney, New South Wales, Butler began his musical career as a busker in Fremantle before achieving his current fame. His band's first two albums (John Butler -1998 and JBT EP -2000) were moderately successful, allowing him to establish a largely word-of-mouth following. The breakthrough came with the Three album in 2001, featuring the tracks "Take" and "Betterman", both of which received considerable radio airplay on Australian alternative youth radio station Triple J and rated highly in their annual Top 100. Appearances at Big Day Out and other major festivals followed. By the time Sunrise Over Sea was released three years later, the single Zebra was getting extensive airplay on commercial radio and proved a major hit for the band. In 2006, the band promoted the album extensively in the United States.

Butler is outspoken with his political beliefs, often making political statements advocating peace, environmental protection, and worldwide love and respect at his performances. He has supported the The Wilderness Society and the Save Ningaloo Reef campaign. He was also known for a long time for his signature dreadlocks, which he cut off in 2008 : "Yes I finally cut them and it feels great! Been thinking about it for awhile and just had to do it. Although I like dreadlocks, they just weren't what I was feeling anymore and I needed a change". His long pointed acrylic fingernails, which are required for the unique hybrid picking style he uses in certain songs, are another one of his trademarks.

John Butler met his wife Danielle Caruana in Broome in 1999. They have two children, a daughter named Banjo, and a son named Jahli. Danielle is also an independent musician in Australia and sings back-up vocals on the band's Sunrise Over Sea album and has her own music name; "Mama Kin"

Introducing The Minister - He Can Supply