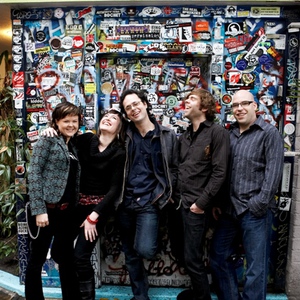 Formed in 2001, The Duhks (pronounced like "ducks") are a 5-member Canadian folk rock group. Four of them are from Winnipeg, Manitoba. Their music draws heavily on Celtic traditions, but is also influenced by gospel music, bluegrass, and other North American musical traditions, and uses acoustic instruments with rock and Latin-influenced percussion. The band's name derives from banjoist Leonard Podolak's earlier band Scruj MacDuhk (pronounced Scrugg MachDuke).

The band's name derives from banjoist Leonard Podolak's earlier band Scruj MacDuhk (pronounced Scrugg MachDuke). MacDuhk was a warrior chieftain who fought with William Wallace, resisting English occupation of Scotland, during the reign of King Edward I. The entire name is a wordplay on the Disney character Scrooge McDuck created by Carl Barks.

In March of 2007 lead singer and budding songwriter Jessee Havey left the band to pursue other interests. Singer Sarah Dugas joined the band in July of 2007 and is on the road with The Duhks.

In late 2007, percussionist Scott Senior left the band to spend more time with his family, as his partner, Tara Beckta, was expecting their second child. Christian Dugas, Sarah's brother and a former bandmate of Leonard Podolak, has since joined The Duhks. Other members are fiddler Tania Elizabeth and guitarist Jordan McConnell.

In October 2007 The Duhks Sustainability Project http://www.greenduhks.com was launched to raise awareness about ways to live a more economically viable and ecologically sustainable lifestyle. In April 2008, The Duhks performed a post Earth Day benefit in Nederland, Colorado.

Your Daughters and Your Sons