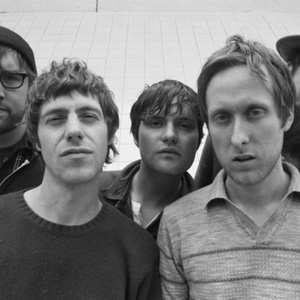 Darker My Love is a psychedelic rock band based in Los Angeles, California. The band consists of 5 members. Tim Presley, a former member of the band The Nerve Agents and also a visual artist responsible for much of the band's imagery, contributes vocals and guitar. Andy Granelli, formerly a member of both The Nerve Agents and The Distillers, plays drums. They are accompanied by Rob Barbato, who plays bass and shares lead vocal duties with Presley, and Jared "The Sandwich" Everett on rhythm guitar.

Will Canzoneri joined the band on organ and clavinet in the latter half of 2006. The group's style is often compared to bands such as Can and My Bloody Valentine.

The band has released two EP's and one LP. Recorded in 2005, their debut LP was released on 22 August 2006 on Dangerbird Records. On 28 August 2007, the band released a 12" 45 rpm split record with Denver-based rock group Moccasin. Darker My Love's contribution is a song called "Hair Decisions," which was recorded at San Francisco's Hyde Street Studios in October 2006. The record was the first release on L.A.-based label IHATEROCKNROLL. In Spring 2006, Presley and Barbato became members of Manchester (U.K.)-based group The Fall, and are both featured prominently on The Fall's 2007 album, Reformation Post TLC. Their sophomore album, entitled 2, was released on 5 August 2008 on Dangerbird Records.

Summer 2010: Andy Granelli has since left the band. Their new drummer is Dan Allaire, who also drums for The Brian Jonestown Massacre. Their third full length album titled Alive As You Are is due out on August 17.

Alive As You Are