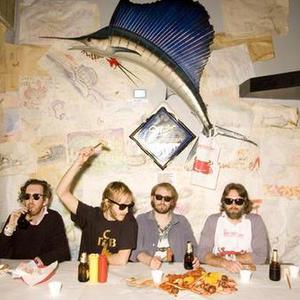 Foreign Born began in San Francisco shortly after Matt Popieluch and Lewis Pesacov became roommates. They'd first met a few years earlier in a university piano practice-room, jamming out to the classic strains of "Sunny Afternoon." Many years and projects later, they found themselves in Los Angeles, where they hooked up with Lewis' old high school pal, Ariel Rechtshaid and his accomplice, drummer Garret Ray. They played together for only one weekend and thus Foreign Born was, er- born.

After some simple geographical modifications, FB quickly began playing shows and soon found themselves opening for such bands as the Futureheads, Black Mountain and the French Kicks...They released a 12" single in October of 2004 which grabbed the attention of StarTime.

On The Wing Now