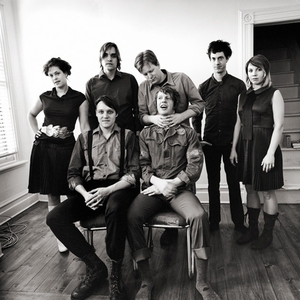 Montreal percussionist Dane Mills performed on the EP and in early live shows. As of May 2005, the touring band includes horn player Pietro Amato (who is in Bell Orchestre and Torngat) and violinist Owen Pallett. Pallett has also opened for their shows, appearing as the one-man band Final Fantasy.

The band's trademark fashion is the waistcoat, giving them an air of "frumpiness". When asked about the rumour that the band's name refers to a fire in an arcade, Win Butler replied: "It's not a rumour, it's based on a story that someone told me. It's not an actual event, but one that I took to be real. I would say that it's probably something that the kid made up, but at the time I believed him." Win Butler and his brother Will grew up in Texas.

Arcade Fire formed around the husband and wife duo of Win Butler and R?gine Chassagne. Joining together as recently as mid-2003, the current line-up solidified in late 2003/early 2004, when their first full-length album Funeral was recorded. Before this an eponymous EP (often referred to by fans as the Us Kids Know EP) had been sold at early shows. The EP was subsequently remastered and given a full release once the band started becoming more prominent. Arcade Fire are known for their enthralling live performances, as well as its use of a large number of musical instruments. In addition to mainstays guitar, drums, and bass guitar, members play piano, violin, viola, cello, double bass, xylophone, keyboard, French horn, accordion, and harp. With several able musicians, the band take most of their instrumental diversity on tour and members switch instrumental duties throughout their shows. The number of instruments, along with a wide set of musical influences has provided a substantial number of resources on which to draw from during the recording process. The promise showed by the band in its live shows allowed it to land a record contract with Chapel Hill-based independent record label Merge Records.

Their first full-length album, Funeral, debuted in September 2004 in the USA and in February 2005 in the UK, and was very highly acclaimed by critics. The title of the debut album was chosen because of the deaths of several relatives of band members during recording. These events created a sombre atmosphere which influenced songs such as "Une Ann&eacute;e Sans Lumi&egrave;re" ("A Year without Light"), "In the Backseat", and "Ha&iuml;ti", Chassagne's elegy to her lost homeland.

Without a major label backing, the success of the band and the album Funeral has been acclaimed as an Internet phenomenon. After a 9.7 rating from Pitchfork, Merge Records sold out their inventory of Funeral and it became the label's first album in the Billboard 200 chart. An early tip from David Bowie was also influential. The band booked small clubs for their 2004 tour but growing interest forced many venue changes, far beyond the band's expectations, and continued internationally into mid-2005 throughout the United States, Canada, Europe, and the SummerSonic Festival in Japan. Taking much of the summer of 2005 off, the band made four key festival appearances at the Coachella Music Festival, the Sasquatch Music Festival, the Lowlands Festival and Lollapalooza. Funeral graced several top ten album lists in 2004. This continued in 2005 with the release of Funeral in the UK, Japan and Australia. The MTV2 2005 Review hosted by Zane Lowe named Funeral Album of the Year, and NME named Funeral Number 2 in their list of 2005's best albums and "Rebellion (Lies)" the best track. By November 2005, Funeral had gone gold in both Canada and the UK and sold in excess of half a million copies worldwide, a phenomenal number for an independent release with minimal television or radio exposure. It has also surpassed Neutral Milk Hotel's In the Aeroplane Over the Sea as the biggest selling Merge Records album to date.

Arcade Fire were featured on the April 4, 2005 cover of Time Magazine's Canadian edition, and hailed as a band who "helped put Canadian music on the world map". On May 1, 2005, the band performed to approximately 15,000 fans at the Coachella Valley Music & Arts Festival; their performance is often viewed as the highlight of Coachella 2005. In May 2005, the band signed a short-term publishing contract with EMI for Funeral and in June, the band released a new single, "Cold Wind", on Six Feet Under, Vol. 2: Everything Ends, the second soundtrack album to the popular HBO series Six Feet Under. The BBC used the track "Wake Up" on an advertisement for their autumn 2005 season and they are now using the tracks "Rebellion (Lies)" and "Neighborhood #1 (Tunnels)" on adverts in January 2006. On September 9, 2005, the band appeared on the UK/US TV special Fashion Rocks, where David Bowie joined them for "Wake Up". This recording, as well as recordings by the collaboration of Bowie's "Life On Mars" and "Five Years", were made available on the iTunes Music Store in a virtual live EP. The same trip to New York City took them to the Late Show with David Letterman and a concert in Central Park. The Central Park Show had a surprise appearance by Bowie, and capped a great touring season for the band. On September 11, 2005, Arcade Fire appeared on the long running BBC music series Top of the Pops, performing "Rebellion (Lies)" - on what was one of the band's first mainstream UK television appearances. The band also performed to a TV audience in Paris for Canal +, and the show was later screened on UK television channel, Channel 4. The band has scored two Number One songs on MTV2(UK)NME CHART SHOW, with "Neighborhood #3 (Power Out)" and a three week run with "Wake Up". However this followed Rough Trade Records (the label who distributes Arcade Fire's music in the UK) deciding at the last minute not to release "Wake Up" on CD, and only on 7" vinyl.

Arcade Fire's song "Wake Up" was played immediately before the Irish rock group U2 opened their concerts on their 2005 Vertigo Tour; the band would subsequently open three shows for that tour, and at the third show, they appeared onstage during U2's encore to join them in a cover of Joy Division's Love Will Tear Us Apart.

Their album Funeral and their single "Cold Wind" were respectively nominated for Grammys in the best Alternative Rock Album and Best Song Written for Television, Film, or Other Media categories (Six Feet Under, Vol. 2: Everything Ends). On April 2, 2006, in Halifax, Nova Scotia, they received the Juno Award for Songwriters Of The Year for three songs from Funeral: "Wake Up", "Rebellion (Lies)" and "Neighborhood #3 (Power Out)". The band was nominated for, but not awarded, three Brit Awards: Best International Group, Best International Album and Best International Breakthrough Act.

Arcade Fire have also recently made two appearances on Later with Jools Holland, a live show on the BBC.

Arcade Fire then planned to begin recording a follow up to Funeral in the winter of 2005-2006, having bought an old church forty minutes from central Montreal which they converted into a studio.

In mid-December 2006 www.neonbible.com went live containing nothing more than a phone number, 1-866-NEONBIBLE where people can listen to a new track called Intervention. Built in the style of customer support lines, the number has other features including a contest and a chance to talk to a live person at a specific time each week.

Then in January 2007, they finally announced that the new album Neon Bible would be released March 5th in UK, March 6th in US. The announcement was made with a video in the album's website, with guitarist Richard Reed Parry using a gramophone and a paper mask of Parry's own face, and sitting on Win Butler?s chair. After the announcement of the album?s release, the website was updated with a streaming version of "Black Mirror", new art and a few phone messages sounding like the band?s members.

So far, 3 singles have been released: Intervention, Keep the Car Running and No Cars Go.

The band headlined the Latitude Festival in 2007, playing all of the hits and joined by Owen on violins

On December 15, 2008, Arcade Fire released Miroir-Noir, a concert movie that includes live footage from the 2006-07 tours shot by Vincent Moon.

A new song called Lenin appeared on the highly acclaimed compilation "Dark Was The Night", a release benefiting the Red Hot Organization, among other high tipped indie artists. The song is very straightforward, remembering the pre-Funeral material, and maybe showing direction for future releases.

The Lightning I, II (CDS)

I Give You Power (Feat. Mavis Staples) (CDS)