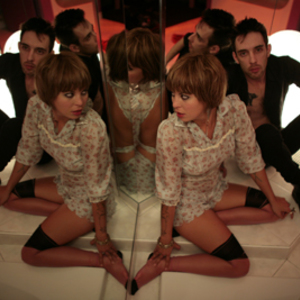 Handsome Furs were an indie rock band which formed in 2005 in Montreal, Quebec, Canada. The band consisted of Dan Boeckner (vocals, guitar) and his wife, Alexei Perry (keyboards, vocals). Boeckner is also a member of the bands Wolf Parade and Atlas Strategic. Handsome Furs have released three albums on Sub Pop: "Plague Park" (2007), "Face Control" (2009) and "Sound Kapital" (2011). The band's name comes from the title of a short story that Alexei was writing at the time of band's conception.

The band's name comes from the title of a short story that Alexei was writing at the time of band's conception.

Plague Park was released on May 22, 2007. Songs of earthbound captains, eggs made of gold and iron, and sleepless bodies have been born. Boeckner's disenchanted vocals thinly resonate while cloaked in a frenzied undertone of fear and uncertainty, all punctuated by bare drum machine beats. Through the course of each track, a deep-seated sense of longing is leveled out by staunch realism as a restless disdain for both urban life and smaller towns collide. Handsome Furs toured Europe before having recorded any songs, and has since opened for the likes of Paavoharju, Islaja, David Cross and Modest Mouse before having released a proper record.

Recorded at Wolf Parade's studio, Mount Zoomer, in the heart of December, Plague Park is their debut. It is a record of melancholic tendency and heartfelt desire; a stripped down symphony relegated between city and country, and made for ears of either side.

In a December 2007 interview, Dan revealed that Handsome Furs are in the writing stages of a new full-length album, titled Face Control: "When Alexei and I got back from Russia we were going to do an EP, but we're also going to do a full album of new songs because we have so many. It's going to be different than the last record... The last one was so intense and heavy in one direction that we wanted to do something different..." The inspiration behind Face Control involves a peculiar aspect of club culture they observed while on tour in Eastern Europe: if party goers wish to reserve a table at a bar in Moscow, they must pay large sums of money through PayPal or with cash; however, their seat is still not guaranteed - bouncers have the authority to turn reserved patrons away from the bar based solely on appearance, which has been coined "face control".

Later the release date was pushed back to March 10: a New Order song is referenced in the track 'All We Want, Baby, Is Everything' and the band needed to legally clear it with New Order.