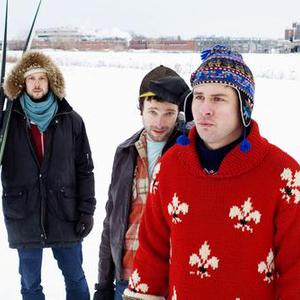 Plants and Animals are a Canadian indie-rock band from Montreal, composed of guitarist-vocalists Warren Spicer and Nic Basque, and drummer-vocalist Matthew 'the Woodman' Woodley. They are signed to Secret City Records. The first seeds of the band were originally planted on Canada's salty-aired East Coast in Halifax, Nova Scotia. Young Warren C. Spicer and Matthew ?the Woodman' Woodley had begun playing together in high-school bands. The sea winds eventually carried them through the vast plains of Quebec to Montreal (a journey they would come to know intimately as the years wore on).

The first seeds of the band were originally planted on Canada's salty-aired East Coast in Halifax, Nova Scotia. Young Warren C. Spicer and Matthew ?the Woodman' Woodley had begun playing together in high-school bands. The sea winds eventually carried them through the vast plains of Quebec to Montreal (a journey they would come to know intimately as the years wore on). It was in the now hallowed halls of Concordia University's music department that they would come upon Nicolas Basque, a strange francophone native that shared their musical inclinations (and a trappeur's finely-tuned taste in cuisine). It wasn't until then that the three boys became men, signified their union with a name, and that Plants and Animals emerged from the wildlife.

In 2003 they bat out an instrumental menagerie of song-like folk-beasts, and put some of them to tape in the form of a recording that local label Ships at Night would later release. By 2005 the three young men were taming the sprawling wilderness of their sound and sculpting real songs, as Spicer also lead the way to a (hitherto unheard of) vocal domination of their material?as if he had been possessed by the ghost of some recently departed soul singer. During this time Spicer and Woodley would occasionally stop by to care for some of the neighbours?Timber, Socalled, and Katie Moore?and play. All the while, the Halifax-born were jamming and pruning with Basque, harnessing the band and its songs like a wild horse. Some called it post-classic-rock. Some called it folk-prog. Those who knew better didn't say anything at all.

In about the summer of 2005 they carried a 24-track Studer ?bull? up the stairs of Spicer's apartment and split their time between their new makeshift studio there (aka Le Carillon Tropical), and the Treatment Room. By fall 2006 the foundations of what would later become Parc Avenue were layed, the band was playing shows (and singing), and a relationship with Montreal label Secret City Records was formed. By summer 2007 the once-monster was complete, temporarily tamed, housed, and ready to be unleashed. While the band awaited the release of Parc Avenue, they kept busy touring in the US, Canada, and Iceland, working on their album art and recording with/avec EP that was released in Canada in October 2007.

Since Parc Avenue was released in early 2008 the band has played over 175 shows, circling the Western world more than once, including appearances at the Pitchfork Festival in Chicago, Primavera in Barcelona, Central Park Summer Stage with the National, and even one night in Columbus opening for Gnarls Barkley, after Danger Mouse discovered Parc Avenue and invited them out.

In January 2010 Plants and Animals announced their latest offering, La La Land, due out on April 20th on Secret City. The album was recorded at the band's home-base studio in Montreal, The Treatment Room, and at Studio La Frette outside Paris, a brokedown old mansion filled with vintage gear and a killer board in the cellar instead of wine. Spicer says, ?the Paris stuff is like a nice Bordeaux and the Montreal stuff is more like a baked potato. Sessions in Paris ended by 10pm, sessions in Montreal by 6am.? Rum and cokes supposedly inspired the initial Treatment Room sessions in late 2008. The album's first track, ?Tom Cruz,? eventually came out of these late nights. As the Woodman tells it, ?it was December, pre-Christmas, so we fuelled the session with rum and cokes. They made us feel like Tom Cruise. It gave us killer smiles and made our enemies wither.?

Waltzed In From The Rumbling

The End of That