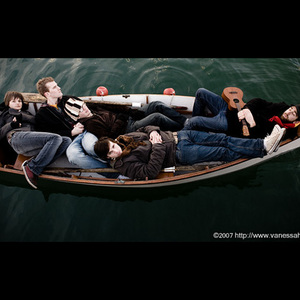 Said the Whale is a Canadian band formed in 2007 as a collaboration between songwriters Ben Worcester and Tyler Bancroft. The pair's debut EP, Taking Abalonia, featured sunny west coast indie pop, with breezy harmonies, shimmering guitars and lyrical tributes to their home city of Vancouver, ?nodding at times to the sea shanties of Neutral Milk Hotel and at others to the boat-shoe-gazing of Vampire Weekend? said The National Post.

In 2008, the album was re-released as Howe Sounds/Talking Abalonia, featuring seven additional tracks that stretched the band's stylistic palate to upbeat folk (?The Light Is You?), thundering rock (?Last Tree Standing?) and gentle ukulele ballads (?The Real of It?). After several line-up changes, the group has settled into a quintet rounded out by drummer Spencer Schoening, keyboardist Jaycelyn Brown, and bassist Nathan Shaw.

In late 2009, their sophomore, full-length album Islands Disappear was released on Hidden Pony Records. Produced by Howard Redekopp (Tegan and Sara, The New Pornographers, other Mother) and Tom Dobrzanski, the album is rich in vocal harmonies and often beautifully references the country they encounter so frequently on tour as in (?Emerald Lake, AB?) and (?Holly, Ontario?). The album would go on to spend 24 weeks on the ChartAttack's weekly campus Top 50 chart and would see the band nominated for Artist of The Year at the 2009 XM / The Verge Music Awards. Lead single (?Camilo (The Magician)?), was dubbed the ?song of the summer? by Grant Lawrence of CBC Radio 3 and would become one of the most played Canadian songs on Modern Rock Radio in 2010. Outside of Canada, the band has been name-checked by the likes of Perez Hilton and youaintnopicasso.com, as well as Tony Robbins and Steve Lamacq at BBC Radio 6.

From day one, the band has upheld an incredibly rigorous touring schedule, crossing Canada numerous times and landing high profile gigs at V-Fest, nationally televised Canada Day celebrations on Parliament Hill and also playing the Olympics when Vancouver hosted in 2010. Said the Whale have toured the country with Mother Mother, Plants and Animals, and Tokyo Police Club, just to name a few, and shared stages with the likes of City and Colour, Blue Rodeo, Hey Rosetta! and Hollerado. They were have been invited to support The Weakerthans in December 2011 on dates in both San Francisco and New York.

In March of 2011, the band embarked on their first major tour of the United States, including several performances at the SXSW music festival in Austin, TX. On the fourth day of that tour, their van was broken into and they were robbed of over $8,000 in gear and personal belongings. This tour was also being captured by a CBC TV documentary film crew for what would become ?Winning America? a film exploring the trials and tribulations of a band trying to break into America, airing this July. Amidst the US tour dates, the band flew into the Toronto-hosted JUNO Awards, where they won New Group Of The Year. The band promptly returned to the States to complete their tour, returning home just long enough to do laundry and repack before hitting the road again to tour across Canada. Said the Whale then took to the UK for a two-week tour highlighted by playing The Great Escape Festival tin May 2011.

On November 8, 2011 Said the Whale announced their forthcoming new studio album will be called Little Mountain and be released internationally on March 6, 2012 via Hidden Pony Records/EMI. The 15-track long player will be the band's third record. Little Mountain was produced by Tom Dobrzanski and mixed by multiple Grammy Award winner, Jack Joseph Puig. November 8 also marks the release of the 4-track digital recording, the New Brighton EP. The songs for the EP were recorded during this summer's album recording sessions.

The lead track from the New Brighton EP, "Lines" is available as a free download from Saidthewhale.com where fans can also see the clever Back-to-the-Future-influenced video in which the band reenacts the classic ?Enchantment Under The Sea? scene. The site also offers streams of "Heavy Ceiling" and "Big Sky, MT," both tracks from Little Mountain.

As Long As Your Eyes Are Wide