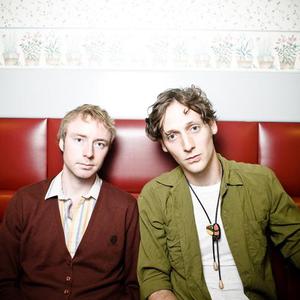 There's something happening on the west coast. Whether it's in the air, the water, or the drugs, a pool of talent has formed around the notion that you can have your pop and eat it too, with brainy, prog-influenced weird-beards like Bend Sinister and arcane psycho-confectioners Mother Mother demonstrating that musical complexity can still be hummable. Commercial, even. Throw the Zolas into the picture and dammit ? you might even call it a scene! Not that it's ever been a concern to long-term musical partners Zach Gray and Tom Dobrzanski...

Throw the Zolas into the picture and dammit ? you might even call it a scene! Not that it's ever been a concern to long-term musical partners Zach Gray and Tom Dobrzanski, who established their gifts for intricate songcraft three years ago under the name Lotus Child.

Since then, the duo has finessed its formula into something even busier yet no less direct, filling their new album Tic Toc Tic with hairpin turns, schizoid tonal shifts, multiple parts, and a sort of cabaret strut.

Miraculously, between New Pornographers vet Howard Redekopp's unfinicky production and the clarity of Gray and Dobrzanski's vision, Tic Toc Tic works like a charm. Complex without being alienating, it aims equally and with dead-eyed precision for the head, heart, and groin.

Guitarist-vocalist Gray hits on the twin poles that define Tic Toc Tic when he reveals an equal passion for the visceral Scandinavian dream pop of Mew, whose influence is obvious, and the classic music hall rag of the Kinks, whose influence is anything but. Not on first listen, anyway, though the presence of Ray Davies is felt in Gray's lyrics. Particularly when he turns his attention to the mundane, like the character in ?You're Too Cool? who wrestles with his vulnerability at Vancouver's hipster HQ the Biltmore. Or the confessional ?Body Ash?, which documents a relationship on the ropes. The directness of its sentiment echoes what Gray describes as Davies' ?populism?.

?The first words in ?Body Ash' are ?my balls',? he laughs. ?Literally. I'm not hiding behind any metaphors.? Soundwise, Gray says he was aiming for ?self-conscious Jeff Buckley?, which also goes some way towards describing a lot of the music on Tic Toc Tic.

Boxing the listener with their virtuosity right off the top, opener ?You're Too Cool? is six minutes of fortified waltz-time piano dissolving into what Gray characterizes as an ?anti-chorus?. ?The Great Collapse? is swaggering and deceptively sunny power-pop for apocalyptic future scenarios. ?Marlaina Kamikaze? bounces between big band stickwork from drummer Ali Siadat, braying trumpet, and a decadent stride-piano breakdown.

Meanwhile, ?You Better Watch Out? has Gray anguishing over a cute girl on a bus while cascading piano arpeggios and Aidan Knight's hyperactive bass push his suffering to operatic levels of high drama. ?Queen of Relax? is featherlite prog, and ?Cab Driver? somehow contrives to be both the most straightforward number on Tic Toc Tic, and the most demanding. ?It's the most fun to play,? says Dobrzanski, who caps the song with a libidinous boogie-woogie throwdown sizzling enough to give ?Honky Cat? era Elton a case of pianist envy. ?It's a rock-out,? he continues. ?I like the athleticism involved in parts of it. It's actually work.?

If ?Cab Driver? finds the Zolas in an almost conventional mood, ?I've Got Leeches? and album closer ?Pyramid Scheme? both explore the fringes of the songwriting team's expanding universe. Gray describes the first as ?baroque? and ?Bowie-esque?, while the latter, he admits perhaps a little freely, ?is the track where we don't care if anyone ever listens to it.? As such, it includes what Gray calls ?a vaguely Maori, haunted house, war chant section.? Deadpans Dobrzanski, ?That moment might come across as a bit out there.?

In truth, Tic Toc Tic is a little out there from bar one to its closing outburst of unbound inspiration. Perhaps it has something to do with the duo's seasoned friendship ? they met as choirboys in Grade 9 ? or a working relationship that begins with Gray broadstroking ideas and passing them along to Dobrzanski, his classical musically inclined ?details guy?.

Whatever alchemical thing lies beneath the sparkling progressive pop of Tic Toc Tic, the partnership has made its great leap forward. It's our job to catch up. And we should consider it a pleasure.