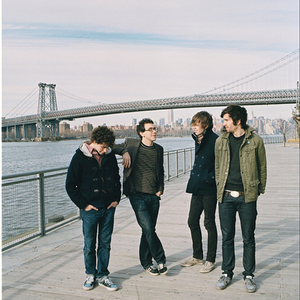 Tokyo Police Club are an indie rock band from Newmarket, ON, Canada. The band consists of Dave Monks (vocals, bass), Josh Hook (guitar, percussion), Graham Wright (keyboards, guitar, vocals) & Greg Alsop (drums, percussion). In 2005, Tokyo Police Club started by accident one day in the ordinary suburb of Newmarket when Greg, Josh, Dave, and Graham decided that they missed playing music together, their previous band having broken up several months before.

In 2005, Tokyo Police Club started by accident one day in the ordinary suburb of Newmarket when Greg, Josh, Dave, and Graham decided that they missed playing music together, their previous band having broken up several months before. The four gathered in Josh's basement, plugging in instruments and making up songs almost at random, with no goal but to recapture the magic that they felt making music together. By the time summer came, TPC had quietly begun playing shows in the Toronto area, shows at which the very few people in attendance seemed impressed by what they saw. The band seemed likely to end here, with the various members preparing to go their separate ways in the fall, when fate intervened in the form of an invitation to play the Pop Montreal festival. Packing their instruments and girlfriends into a tiny university residence room, TPC spent a week immersed in music, spending days lazily wandering the streets of Montreal and nights rehearsing loudly in the tiniest of spaces, and topping it off in style with a sold out show that saw the band play for the first time to an audience that was actually interested. A few weeks later, all four had agreed that it was time to break their mother's hearts and pursue that most elusive of pipe dreams: a career in the music business.

The boys got straight to business, playing a series of Toronto shows, and earning a reputation for live shows that were exuberant, lively, and unrestrained. In January, the very day that Dave returned for good from university, Tokyo Police Club signed up with esteemed Toronto label Paperbag Records to release their debut EP in Canada. In April 27, 2006, A Lesson in Crime was released in Canada and U.S (February 12, 2007, UK released), and the band spent the next months on the road, bringing their optimistic brand of wide-eyed post-pop to audiences across Canada, U.S. and Europe, and making many new friends along the way.

Responding to criticisms that A Lesson in Crime is too short (16:22), Graham Wright had this to say in an interview with Ukula: "It's very quick, quick, quick, one, two, three. Some of the songs don't have a lot of space in them and the album doesn't have a whole lot of room to breathe, but I think in the case of an EP this is a really good thing."

The Smith EP came in February 14, 2007. At a July 20, 2007 stop along the tour in Omaha, Nebraska the band announced the inking of a deal with Omaha based Saddle Creek Records during their live show at the Saddle Creek owned venue The Slowdown, to release their debut LP, entitled Elephant Shell, that was released on April, 22nd 2008 to much applause.

So what exactly is Tokyo Police Club? Perhaps EYE Weekly summed it up best when they wrote "[Tokyo Police Club] are undeniably catchy and raw, marrying danceable hooks with talk of robot masters and global emergencies, providing an upbeat soundtrack to our troubled times." Personally, however, I prefer Exclaim's proclamation that "somehow, the deeply innocuous subdivisions of Newmarket, Ontario have hatched a four-headed beast of tunefulness."

Your English Is Good (CDS)