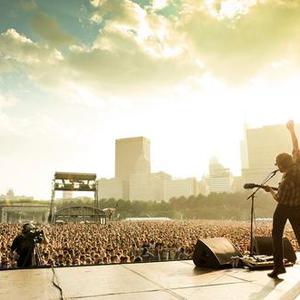 The Black Keys are a two-man blues-rock group from Akron, Ohio, United States which formed in 2001, consisting of singer and guitarist Dan Auerbach and drummer Patrick Carney. The band name was inspired by a schizophrenic artist and friend in Akron, who used the term "black keys" to describe things he disliked or people he did not trust. The Black Keys have roots in traditional blues and psychedelic rock stylings.

They released their first album, The Big Come Up, in 2002, followed by Thickfreakness in 2003, and Rubber Factory in 2004. October 2005 saw the release of the DVD Live, recorded live at The Metro Theatre in Sydney, Australia March 18, 2005. In 2006 they released Magic Potion, as well as the lesser-known Chulahoma and a single version of Your Touch.

One of their trademarks is their preference for simple, lo-fi recording techniques. They refuse to use big-name studios, and do most recording, producing, and mixing themselves. Most of Thickfreakness was recorded in about 14 hours in Carney's basement, using only an early 80's Tascam 388 8-track recorder. Often, their recordings still have background noises (such as an owl hooting).

The Black Keys have achieved increasing critical acclaim and recognition since their debut album, which itself received praise from Rolling Stone magazine. Time magazine named them one of the "10 Best Acts of 2003" (behind OutKast and The White Stripes). They have supported a number of bands: they toured with Sleater-Kinney in 2003, had a short stint opening for Beck, have recently opened for Radiohead on the American leg of their brief 2006 tour, and performed at Lollapalooza in 2005 and 2007. In addition to this, they were also well-liked by influential British radio DJ John Peel and appeared on both Late Night with Conan O'Brien and The Late Show with David Letterman. Famous followers of the band include Led Zeppelin frontman Robert Plant, Billy Gibbons of ZZ Top, Thom Yorke and Jonny Greenwood of Radiohead, and Metallica guitarist Kirk Hammet. Matt Helders, drummer for the Arctic Monkeys, can be seen in a Black Keys T-Shirt in an interview on MTV's RAW.

Their song "When the Lights Go Out" was featured in the 2007 film Black Snake Moan, and also on the soundtrack for that movie. The Black Keys were included in the soundtrack of the 2003 movie School of Rock with their song, "Set You Free". "Lies" was featured in the conclusion of the February 4, 2009 episode of Lie to Me. One of their songs, "Girl Is on My Mind", was used in a 2006 Sony Ericsson advertisement, starring the tennis players Ana Ivanovi? and Daniela Hantuchov?, gaining the band more commercial recognition. It was also used in a 2006 Victoria's Secret commercial featuring Heidi Klum and could be heard in the movies Rest Stop and Cashback. Their song "10 am Automatic" was used in the video game MLB '06: The Show, The O.C., The Go-Getter, and was also used in a 2007 American Express commercial starring Shaun White. "Your Touch" was featured in a 2007 Lee's jeans commercial, and can be heard both in an episode of NBC's Friday Night Lights and in an episode of "Eastbound and Down". Their cover "Grown So Ugly" can be heard in the background of the going away party in the 2007 film Cloverfield. "Strange Times" is used in Grand Theft Auto IV on the in-game radio station Radio Broker. "Strange Times" can also be heard during a preview for ABC's The Mole, and the trailer for season three of the Showtime series Dexter, as well as a promo for Gossip Girl. Their song "Just Got To Be" is used on the soundtrack for the video game NHL 08, and "Hard Row" is featured in the premiere episode of the FX show Sons of Anarchy. Sons of Anarchy has gone on to use "Keep Me" in both Episodes 6 and 7, as well as "Busted" in episode 7. The song "Lies" is featured in the advertising campaign for the third season of HBO's Big Love. "The Breaks" can be heard in Guy Ritchie' film RocknRolla. "Your Touch" can also be heard in the HBO series "Entourage" in the episode "Manic Monday", during the opening scenes. The song "Psychotic Girl" is featured the episode "Messin' with the Kid" in season 6 of One Tree Hill. "I'll Be Your Man" is the opening theme song for the HBO show Hungand was also featured in an episode of the FX Network show Rescue Me. "Your Touch" can also be heard in the film Zombieland and in an episode of "Eastbound and Down" on HBO. The song "I Got Mine" has been used in HBO's sports reality series 24/7 Pacquiao-Hatton" [13] as well as background music for the 2009 American League Championship Series. The song "Next Girl" is featured in the in game radio of Saints Row the Third.

Their fourth record that Danger Mouse produced Attack & Release was out April 1st 2008. The duo's fifth album is the first one recorded in a proper studio.

The Band's fifth album, "Brothers" was released in spring 2010 and has seen increasing amounts of exposure to the "Dancing T-Rex" video for the song "Tighten Up" that went viral...until the band asked it to be removed because they felt it made light of their music. A proper video was released later in 2010, featuring Dan Auerbach and Pat Carney at a playground and was pushed on the band's official YouTube channel, as well as through the iTunes and Zune marketplaces. The track "Tighten Up" was also used as the background music for a Subaru Legacy commercial and on the FIFA 2011 Soundtrack.

El Camino their latest album was released on the 6th of December 2011.