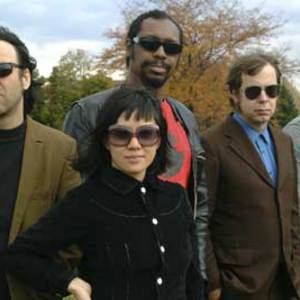 One of Detroit garage punk legend Mick Collins' many post-The Gories projects, for years The Dirtbombs seemed to exist more in concept than in reality. As if in reaction to the bass-less sound of The Gories, the band brought together two drummers, two bass players, and Collins on vocals and guitar. And other than consistently loud volumes and lots of noise, the Dirtbombs actually had a surprisingly diverse sound, composing across a broad spectrum of styles from garage rock, punk, and glam, to classic soul and r&b.

They began primarily as a 7" band, putting out five singles before Larry Hardy of In The Red convinced them to record a full-length, 1998's Horndog Fest. After another handful of singles the Dirtbombs released their sophomore album, Ultraglide in Black, in May 2001, a set devoted primarily to vintage R&B covers. The album won them a growing following in Europe, aided by frequent overseas touring (including a jaunt with The White Stripes). Collins and company returned to a tougher, more rock-oriented sound for 2003's Dangerous Magical Noise, and came back in 2005 on a split album with King Khan And His Shrines, Billiards at Nine Thirty. In May of that year In the Red put out If You Don't Already Have A Look, a double-CD, 52-track singles compilation that also featured six new songs. Though the band's relatively short lifespan had seen at least ten lineup shifts, by the point of Have a Look it had more or less solidified around Collins, drummers Ben Blackwell and Pat Pantano, and bassists Ko Shih and Troy Gregory.

We Have You Surrounded