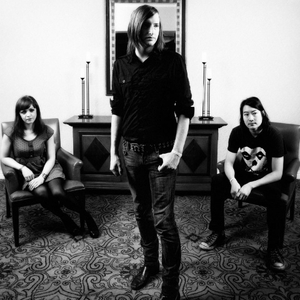 The Von Bondies are an American alternative rock band. The current members are Jason Stollsteimer on vocals and lead guitar, Christy Hunt on rhythm guitar, Leann Banks on bass guitar and Don Blum on drums. The original line-up formed at the 1997 Cramps/Guitar Wolf show by Stollsteimer and Marcie Bolen. They went through a variety of names, including The Baby Killers. They also had many member changes before settling on the band name The Von Bondies in 2000. Blum joined the band around 1999 after attending numerous Baby Killers shows, while Leann Banks was picked via an audition.

The Von Bondies got their break by playing a New Years Eve show in Detroit, Michigan in 2000.

The Von Bondies have completed 6 headlining tours of the United Kingdom/Europe, two of Australia, and ten of the United States. The Von Bondies released Raw and Rare, a live album, through Dimmak Records in 2003. They released Pawn Shoppe Heart through Sire Records in February 2004 to positive reviews. It was produced by Jerry Harrison of Talking Heads and co-produced by Jason Stollsteimer. They released the song "Cmon Cmon" as their first single and the song shot to popularity in summer 2004.

In 2008, the band signed with indie label Majordomo Records, joining label mates The Airborne Toxic Event and Earlimart. Their label debut, Love, Hate And Then There's You, was released in February 2009

Love, Hate And Then There's You

We Are Kamikazes (EP)