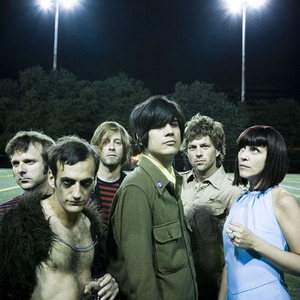 D?jeuner sur l'herbe, the first offense of Montreal's rock outfit Les Breastfeeders, conquered both the public and the critic after its release in spring 2004, on the Blow The Fuse label. Since then, Luc Brien (vocals and guitar), Suzie McLeLove (vocals and guitar), Sunny Duval (guitar), Joe (bass), Johnny Maldoror (tambourine) and Fred Fortin (on drums with the band since 2005), have travelled throughout Quebec for two years, to present their frenetic and contagious shows.

Invited to perform at numerous festivals and events (Francofolies de Montr?al, Festival d'?t? de Qu?bec, F?te de la St-Jean ? Qu?bec, Art Vocal de Trois-Rivi?res, Chanson de Tadoussac, CBC Radio 3/Bandeapart Vancouver concert...), the band also received the Prix Miroir de l'Artiste d'ici at the Festival d'?t? de Qu?bec 2005, the Power and Stage Beast awards at the Mimi's gala in 2005, and its song "Angle Mort" was awarded the "Chanson prim?e" prize from SOCAN in 2003. Several songs from the album have topped radio charts across the province and two of their videos got heavy airplay on Musiqueplus. They've also flirted with the United States, where they played some fifteen dates, along with appearing on important free-form and college radio charts (WMBR, WFMU, KALX?).

In spring 2006, Les Breastfeeders are back full force with Les Matins de Grands Soirs. Recorded in Montreal at the Breakglass and Beatbox studios, by Ryan Battistuzi (Malajube, Yesterday's Ring), this new album serves justice to the band's sound and energy.

On top of the dizzying tour schedule and the excitment surrounding the release of Les Matins de Grands Soirs in the country, the record will be released in France in winter 2007, on the Boxson record label (Le Nombre, Prototypes) and in the United States. Supported by Bonsound (management and booking), Blow The Fuse (label) and a stronger album, the band's ready to invade the radio airwaves from here and abroad.