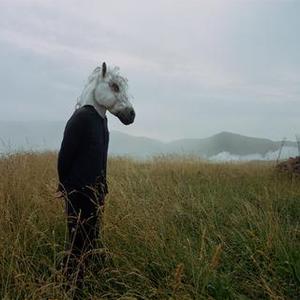 Sparklehorse was an American alternative rock band formed in 1995 and led by Mark Linkous (September 9, 1962 - March 6, 2010), a Richmond, Virginia native and last of a long line of southern coalminers. Linkous recorded much of Sparklehorse's material in his home studio, and his Southern Gothic vision guided Sparklehorse. Drummer and multi-instrumentalist Scott Minor was a frequent collaborator.

Before his suicide in March 2010, Linkous created many albums of beauty and discord and much of Sparklehorse's music has an introspective, melancholy feel, which Linkous credited to a chemical imbalance. His lyrics are full of odd imagery: Joe Tangari describes Linkous' songs as "defiantly surrealist... with all manner of references to smiling babies, organ music, birds, and celestial bodies... In fact, some of the lyrics are so surreal that it's hard to imagine they're even metaphors for anything."

Musically, Sparklehorse were not far removed from alt country, though there are as many differences as similarities between that genre and Sparklehorse: Linkous was fond of incorporating obsolete musical instruments or technologies (such as woozy mellotrons, scratchy, distorted wire recordings of his own voice, or cheap, tinny drum machines), in ways reminiscent of some of Tom Waits' music. Sparklehorse offered a few full-throttle hard rock numbers, as well, such as "Some Day I Will Treat You Good" or "Happy Man".

Sparklehorse's first album was the confoundingly-titled Vivadixiesubmarinetransmissionplot (1995). The record was a modest success, mainly on college radio. The supporting tour, however, found Linkous overdosing on valium and antidepressants. As a result, Linkous passed out in his London hotel room and remained unconscious with his legs pinned beneath him for almost fourteen hours.
This caused a buildup of potassium which was released when he was moved, causing his heart to stop for two to three minutes. He was hospitalized for weeks afterwards (nearly losing both legs), enduring numerous painful surgeries.

Good Morning Spider (1999) was recorded following this incident, and with mournful songs such as "Painbirds", many critics have mistakenly conjectured that Linkous's near death experience inspired the somber, yet hopeful tone of the album. However, Linkous has stated that much of the material on GMS was written prior to 'the incident'. One song which did result from it is "St. Mary", which is dedicated to the nurses at the hospital of the same name where Linkous recuperated.

2001 saw the release of It's A Wonderful Life and features appearances by Tom Waits, PJ Harvey, Nina Persson and Dave Fridmann, the pre-eminent producer of indie music at the time. Whereas much of "Vivadixie..." and "Spider" were recorded solely by Linkous in his "Static King" studio on his farm in rural Virginia, "Wonderful Life" was more of a formal effort, largely recorded by Fridmann after Linkous was asked by his label to retain an outside producer for the project.

Aside from his own music, Linkous has also become a sought-after record producer, and has helmed works such as Nina Persson's solo record, "A Camp", and Daniel Johnston's "Fear Yourself". Linkous has been one of the most ardent supporters of Johnston, an outsider artist who has had a long battle with mental illness. In 2004, Linkous curated and produced "Discovered Covered: The Late Great Daniel Johnston", a tribute album to the still-living Johnston featuring acts such as Beck, Death Cab for Cutie, Vic Chesnutt, Tom Waits and Bright Eyes. It also includes a collaboration between Sparklehorse and The Flaming Lips on the track "Go".

In 2003, Sparklehorse opened some concerts for R.E.M.

Linkous relocated his "Static King" studio to a remote mountaintop in North Carolina. Several years ago, he purchased a vintage recording console built by the near-mythical Daniel Flickinger. His fourth album has been delayed due to his own health problems as well as the necessity of overhauling the temperamental recording desk. Recently, Linkous has been carrying out promotional work for a new album Dreamt for Light Years in the Belly of a Mountain - collaborating with Danger Mouse and other notables including Christian Fennesz and Steven Drozd, and a release date of 25th September 2006 accompanied by US and UK tours was officially announced. Some of the newly released songs appeared at the time of It's A Wonderful Life as b-sides or demos, but there is a different feel to the album, thanks to stripped down production that has only been hinted at in previous albums. The ten minute long finale, with same title as the album, suggests a contemplative movie soundtrack rather than a song. Linkous has since realised his own ultimate song, remaining only now in music.

On March 6, 2010, Linkous committed suicide with a shotgun blast to his heart in the backyard of a friend's house in Knoxville, Tennessee. He was 47 years old. A retail version of his delayed collaboration with Danger Mouse, "The Dark Night of the Soul", was released in July 2010.

Dark Night of the Soul

Dreamt For Light Years In The Belly Of A Mountain

It's a Wonderful Life