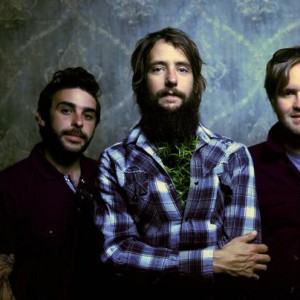 Band of Horses, known early in its life simply as Horses, is an Indie band formed in Seattle and later moved to Charleston, South Carolina, United States by Ben Bridwell, Mat Brooke, Tim Meinig and Chris Early. Creighton Barret and Rob Hampton Later replaced Meinig and Early and in February 2006 Joe Arnone joined the troupe. They are currently signed to Fat Possum Records. Band of Horses was formed by Ben Bridwell (guitar, vocals) and Mat Brooke (guitar) in 2004 after the break-up of their previous band, Carissa's Wierd.

Band of Horses was formed by Ben Bridwell (guitar, vocals) and Mat Brooke (guitar) in 2004 after the break-up of their previous band, Carissa's Wierd. Rob and Creighton were formerly of the mathrock band The New Mexicans before joining Band of Horses. The group initially got attention from Sub Pop Records after opening for Iron & Wine in Seattle area shows. In 2005, the band released their debut EP, Band Of Horses Tour EP, which was sold exclusively at shows and on Sub Pop's website. Their debut full-length, Everything All the Time was recorded in 2005 with producer Phil Ek and released on March 21, 2006 to generally good reviews.

On July 13, 2006, Band of Horses appeared on the Late Show with David Letterman sans Brooke. As of July 25, 2006, Mat Brooke left Band of Horses to focus more on his other band, Grand Archives, who had also signed to Sub Pop.

The band's second album, Cease to Begin, was released on October 9 2007. The band has recently moved its base of operations from Seattle to Mt. Pleasant, South Carolina

Their latest album, Infinite Arms, was released in May of 2010.

Why Are You OK

Acoustic at the Ryman