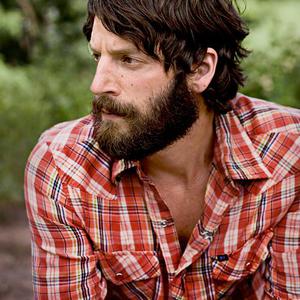 Ray LaMontagne (born June 18, 1973) is a folk singer-songwriter currently living in Wilton, Maine. He is currently the lead singer of Ray LaMontagne and the Pariah Dogs After hearing a Stephen Stills song, Treetop Flyer, he decided to quit his job and pursue a career in music. He has since released three records, Trouble, Till The Sun Turns Black, and Gossip In The Grain. A soft-spoken person who is known for his raspy voice, LaMontagne has won a number of awards for his music and has performed at several charity events.

Ray LaMontagne was born in Nashua, New Hampshire, in 1974 to a constantly travelling mother. When LaMontagne was a child, his mother left his musician father, while his father was on tour, and moved him and his siblings up North. His father had no contact with LaMontagne and for years had no knowledge of his whereabouts. Because of the stories told to LaMontagne about his father, LaMontagne refrained from most musical activity, instead spending much of his time reading fantasy novels in the forest.[1] His mother moved him and his five siblings to wherever she could find work, so it was difficult for LaMontagne to become friends with other children. LaMontagne attended high school at Morgan High School in Morgan, Utah, but frequently ditched class, wrote stories, or got into fights with other students. This caused him to get poor grades and LaMontagne barely graduated.[2] After graduation, LaMontagne moved away from his family to Lewiston, Maine in order to find a full-time job.[3]
LaMontagne found a job at a shoe factory in Lewiston where he worked 65 hours a week. One morning at 4 a.m., LaMontagne heard Stephen Stills' song "Treetop Flyer" on the radio as it awoke him for an early work shift.[4] After purchasing the Stills Alone album, LaMontagne decided that he wanted to quit his job at the shoe factory and start a career as a singer-songwriter.[5] LaMontagne began touring in 1999, although he maintained a side job as a carpenter.[4] In the summer of 1999, LaMontagne amassed 10 songs for a demo that he sent to various local music venues. The owner of a local theater heard the demo and invited LaMontagne to open for folk acts such as John Gorka and Jonathan Edwards. A business executive heard LaMontagne's recordings and introduced him to Jamie Ceretta of Chrysalis Music Publishing. CMP recorded his first album, and sold it to RCA Records in the US and Echo Records in the UK.[3]

Trouble
Ray LaMontagne performing at the Sasquatch Music Festival.
In a period of two weeks, LaMontagne re-recorded Trouble at Sunset Sound in Los Angeles, California with producer Ethan Johns. RCA Records released the album on September 14, 2004. The album featured performances by Nickel Creek violinist Sara Watkins on two tracks, and Stephen Stills's daughter Jennifer Stills on another.[6] In the US, the album reached a low peak of #189 on the Billboard 200, but sold over 250,000 copies.[7][8] Trouble has sold over 400,000 copies worldwide.[2]
During a tour to promote the album, LaMontagne played six songs for an episode of Austin City Limits, which first aired on October 29, 2005.[9] On the third week of finals in the fifth season of American Idol, eventual winner Taylor Hicks performed "Trouble". Chris Sligh, an American Idol Season 6 Top-12 finalist, also performed the tune to rave reviews from the judges. An EP of LaMontagne's performance at the Bonnaroo Music Festival was released on December 6, 2005. "Trouble", "All the Wild Horses", and "Burn" have been used as background music for the TV show Rescue Me. "All the Wild Horses" was featured on the show's soundtrack, which was released on May 9, 2006.[10] In 2006, "Trouble" became a top 40 hit in the UK, and the album peaked at #5 in that country. LaMontagne performed on Top of the Pops on June 18, 2006.[11]

Till the Sun Turns Black
LaMontagne's second album, Till the Sun Turns Black, was released August 29, 2006 in the US. Also produced by Ethan Johns, the album featured more instrumentation than Trouble, including the use of a horn section and string section on several of the songs. Singer-songwriter Rachael Yamagata provided background vocals on the song "Barfly."[12] The album peaked at #28 on the Billboard 200 album chart, selling 28,000 copies in its first week of release.[13] The album also sold enough copies to be a top three heatseeker album in New Zealand. According to his website, the first single from the album is "Three More Days". LaMontagne performed on The Tonight Show on October 6, 2006 to promote the album. His song "Till the Sun Turns Black" was featured on the television show "ER"[14], and his song "Lesson Learned" was used on the television show "One Tree Hill."

Composition and performance
Ray LaMontagne is particularly known for his raspy voice, which he claims to have learned by singing through his gut and not his nose.[15][16] LaMontagne claims that he is highly influenced by Stephen Stills, and critics have compared LaMontagne's music to that of Van Morrison, Nick Drake, and Tim Buckley.[17][18] LaMontagne refers to himself as a "very private person", and infrequently gives interviews. He also usually does not interact with the audience between songs during his live shows.[19] LaMontagne has been known to perform live shows in the dark in order to separate himself from the audience.[2]

Awards and distinctions
Ray LaMontagne won three Boston Music Awards in 2005 for "Album of the Year" (Trouble), "Song of the Year" ("Trouble"), and best male singer/songwriter. He was also nominated for "Act of the Year" and "Male Vocalist of the Year".[20] Later that year, he was named "Best New Acoustic Rock Artist" on the 2005 XM Nation Awards, and was nominated for "Best New Touring Artist" in the 17th Annual Pollstar Awards[21][22] Trouble was nominated for the 2005 Shortlist Music Prize, but did not win.[23] Esquire Magazine awarded LaMontagne a "Best Voice Esky" in the 2006 Esky Music Awards[16] In April 2006, GQ Magazine listed "The Seduction of a Ray LaMontagne Concert" as one of the 25 sexiest places on the planet to take a girl.[24] LaMontagne was nominated as the best International Breakthrough Act in the 2007 BRIT Awards, but lost to Orson.[25]

Charitable events
In 2005, he performed at "From the Big Apple to the Big Easy", a fundraiser for the victims of Hurricane Katrina. The concert was held at the Radio City Music Hall on September 20, 2005, and also featured Dave Matthews, John Mayer, and Simon & Garfunkel among others.[26] LaMontagne also played at the "Warren Haynes Christmas Jam" that year on December 17, 2005. The concert raised funds for Habitat for Humanity in Asheville, North Carolina.[27] LaMontagne performed at KYSR's Lounge for Life charity concert on October 5, 2006 at the House of Blues in West Hollywood, California. He also auctioned off one of his guitars on eBay for its charity auction. Funds raised from the concert and auction went to breast cancer research.[28]

Part of the Light

Gossip In The Grain

Till The Sun Turns Black